My Rabbit Has Spondylosis

My Rabbit Has Spondylosisspinal problem in rabbit, Rex doe, spondylosis, audrey pavia, city stock blogI thought Prudence was going to leave me, but with proper medication, he seems to be doing better.Tough times for my Rex doe, Prudence.Tough times for my Rex doe, Prudence.apaviaMy Rabbit Has Spondylosis By Audrey Pavia, Urban Farm contributorMonday, December 31, […]

My Rabbit Has Spondylosis

Audrey Pavia
Keeping farm animals in the city can be a real hoot. Follow freelance writer Audrey Pavia’s adventures in Southern California with a yard full of urban livestock, including horses, chickens, a Corgi and an urban barn cat. She somehow manages all these silly critters by herself while working full-time. And you thought “The Simple Life” was out there? 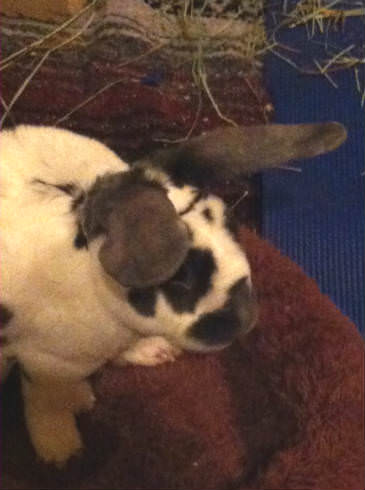 Prudence is struggling in her old age.

My checkered Rex doe, Prudence, is 10 years old â€” pretty ancient for a bunny. Aside from being very thin, she was doing very well for her age. Until this past week.

On Thursday morning, I noticed she was having trouble getting around in her pen. She seemed wobbly. Worried, I called in sick and drove her 35 miles to the clinic where Heidi, my veterinarian sister, works.

Heidi examined Prudence and did a blood test. Her liver enzymes were slightly elevated, so Heidi X-rayed the liver and did an ultrasound. She was looking for a tumor, but didnâ€™t see one. Concerned Prudence might actually be suffering neurological issues from a parasitic infection common in rabbits, Heidi sent her home with antibiotics.

The next morning, I found Prudence lying on her side, unable to walk. Her back legs were covered with urine and feces. I lifted her up and put her down on all fours, but she flopped over again. “This is it,â€ť I thought to myself. “Sheâ€™s dying.â€ť

I called Heidi, who said to bring her in. She would try giving her a steroid injection. If this didnâ€™t help, we would discuss euthanasia. I called in late for work, and drove back to Heidiâ€™s clinic. This time, I dropped Prudence off rather than staying since I needed to get to work. I said goodbye to my sweet little bunny, expecting Iâ€™d never see her again.

Much to my surprise, Heidi called me at work and told me that Prudence was hopping around in the cage theyâ€™d place her in. I was stunned. The rabbit I saw this morning was immobile. What had changed? Heidi hadnâ€™t even given her the steroid yet. Was this Prudenceâ€™s way of saying she wasnâ€™t ready to go?

Heidi had taken more X-rays, and amended her diagnosis. Instead of a liver or neurological issue, she believed Prudenceâ€™s problem was orthopedic. The radiograph of her back showed considerable spondylosis.

After keeping Prudence overnight, Heidi brought her back to me on Saturday morning. She had given her an injection of Adequan and steroids for her joints, and provided with Metacam for pain.

Meanwhile, I refurbished the pen Prudence shares with Smokey to make it more comfortable for her. I put a yoga mat down on the floor to help with traction. I cut down one side of each litter box so she could gain easy access. I went and bought her a plush cat bed where she could rest. I also bought a bag of Critical Care food to help support her nutritionally through this ordeal, along with baby cornstarch and ferret shampoo to clean her urine-soaked bottom. Today, I placed an order for a supplement called Cetyl M, which is supposed to do wonders for arthritis. It should arrive in a few days.

Right now, itâ€™s a game of wait and see. Prudence is eating, drinking and grooming herself, but getting around is clearly a problem for her. Iâ€™m hoping all this support will help her feel better, but if not, Iâ€™ll have a tough decision to make. Quality of life is important, and I wonâ€™t keep her around if just moving is too hard for her. The next two weeks will be crucial.