My Tomato’s Leaves are Turning Yellow—Help!

Prevent disease-causing funguses that could be killing your tomato crop from spreading across your garden. 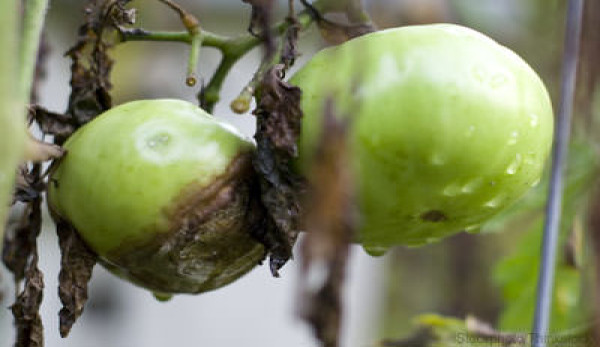 Yellow leaves on tomato vines are likely signs of fungal disease, especially if they start at the bottom and slowly creep upward. The most common fungal diseases are early blight (Alternaria solami) and leaf spot (Septoria lycoperoki), both of which cause yellow leaves with dark spots.

To slow the spread of fungal disease, prune yellow leaves and those showing signs of damage. It’s even a good idea to prune healthy green leaves growing beneath the fruiting branches toward the ground to improve air flow, which helps dry the foliage and reduce the incidence of soil- and water-borne disease. Don’t prune leaves that shade fruit, as you could expose tomatoes to direct sun, causing sunscald.

Another fungus-prevention tactic is to mulch plants with a thick layer of weed-free straw, which will keep soil—and fungal spores—from splashing onto lower leaves during heavy rains and watering. As a rule, water the tomato vine’s roots, not its leaves. Foliage that gets wet, especially late in the day, creates ideal conditions for fungal growth.

A third type of fungal disease, late blight (Phytophthora infenstans), is fast-moving and extremely destructive, wiping out entire crops in a matter of days. Leaves turn grayish-brown and shrivel up as entire plants—leaves, fruits and stem—rot away. There’s not much to do for infected plants except pull up the vines and burn them. Don’t put them in the compost bin because the spores can spread to other plants. The most effective strategy for late-blight prevention is to constantly scout for infected plants and remove them as quickly as possible because late blight can only survive on living tissue.

Andy Tomolonis is a gardener and freelance writer living in suburban Boston. Follow him on Pinterest: https://www.pinterest.com/andytomolonis/