If your older hens aren’t scratching around as they should, clip their nails to prevent overgrowth. 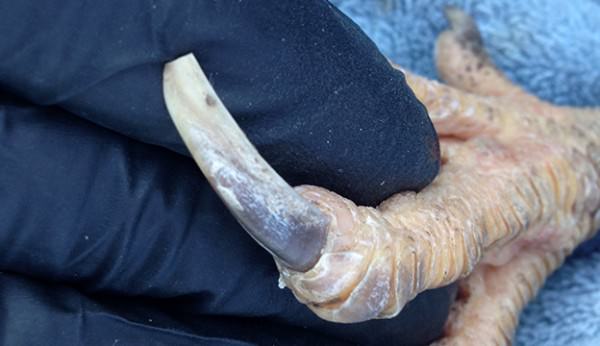 Natural chicken behaviors are limited throughout the winter months, so activities like scratching through the garden, compost pile, stones and treats on the concrete patio happen less often when the ground is covered in snow or ice. Chickens’ scratching behavior files their nails, keeping them at a comfortable and functional length. In aging hens, especially in heavy, sedentary breeds, limited scratching opportunities cause the nails to grow too long. When the nails become too long, they will force the toes into an unnatural position while walking, curling the toes inward. Over time, the toes can become permanently deformed, causing the chicken pain and further reducing the animal’s physical activity.

One of my largest and most sedentary hens, a 5½-year-old Silver Laced Wyandotte, has always had trouble with her feet and legs. Unfortunately, her feet have been deformed since she was young, which seems to contribute to her inability to file the nails naturally. This winter they’ve grown far too long, while her flockmates’ nails are still normal.

A normal chicken nail is rounded at the end, and the quick is not very far from the end—this nail does not need to be trimmed. If you do cut to the quick (the blood vessel inside the nail), the nail will bleed quite a lot. The longer the nail, the further the quick has grown along with it.

Pauline’s nails were twice as long as they should be, and they were squared and jagged at the ends. I trimmed them with the same clippers I use for my dog’s nails. However, chickens are not dogs, so I did not insert the nail all the way to the guard intended to protect the quick for my dog’s nails, because I’d likely cut her to the quick. So, I cut much less than she needed. When the nail is trimmed slightly, the quick will recede over the course of a week or so. Then, I can go back and trim again. Pauline is now on a weekly nail-trimming schedule to get her nails and feet back to health so she can function normally.

To trim a chicken’s nails, you will need the help of another person. Pick up your chicken and have your helper wrap her with the towel. The towel will keep her secured and her wings contained. Now you can work on her feet. If the nails are light in color, a flashlight can be used to find the end of the quick. If the nails are dark, like Pauline’s, the quick is much harder to find, so trim just the very end of each nail—less than you think you should—and then plan on trimming again in a week. When it’s obvious that her natural behaviors are rounding the edges of her nails again, you can stop regular trimming and let her take over.

If you cut too far and she begins to bleed, have your helper apply pressure with the towel while you sprinkle styptic powder on your gloved hand. Press the bleeding nail into the powder and hold pressure to stop the bleeding. Be sure to apologize.

Because your chicken is being held securely, now is a good time to inspect her legs, and, if necessary, clean them and treat the legs for mites. As you can see in the photo above, Pauline’s leg scales are raised, so I’ll treat her for leg mites as I continue to slowly shorten her nails.