A solid dual-purpose bird, the Naked Neck's namesake trait can be passed on to any breed of chicken. 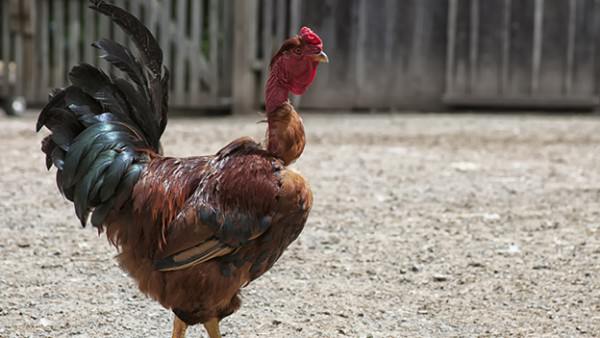 Use: The Naked Neck (commonly referred to as Turken) is a dual-purpose breed known for the lack of feathering on its neck. This breed is a superb layer of brown eggs and also serves as a table fowl.

History: Naked Necks have a distant and obscure past, but it is generally agreed that the breed originated in Eastern Hungary. They were later reached their closest state of perfection as a breed in Germany. The Naked Neck trait is highly dominant and is passed on the first generation offspring when crossed with a non-naked neck breed. Commonly sold as ‘Turkens’ supposedly a cross between turkeys and chickens, this breed is all chicken. They were imported into the United States in the 1800’s but were not admitted to the American Standard of Perfection until 1965. They are listed in the All Other Standard Breeds Class

Conformation: The Naked Neck trait can be passed on to any breed of chicken, so particular attention to specific color patterns and type is important to distinguish from crossbreeds. Naked Necks are recognized in Red, Buff, Black and White. Barred Necked Necks are also available. They are a moderately-sized and shaped breed with a Single Comb. Naked Necks have less than half the feathers than other breeds of the same size. The bare patches on their skin lack feathers as well as feather follicles and the chicks hatch with the bare patches of skin already present. Standard weights are: Cock: 8 ½ lbs., Cockerel: 7 ½ lbs, Hen: 6 ½ lbs., Pullet: 5 ½ lbs.

Special Considerations/Notes: Naked Necks handle hot and cold weather well and are an interesting and useful addition to any small farm flock.