The Nankin is a bantam chicken breed used primarily as exhibition fowl, though the hens are decent layers of tiny, delectable, creamy-white eggs. The breed is very broody and excels as surrogate hatchers. 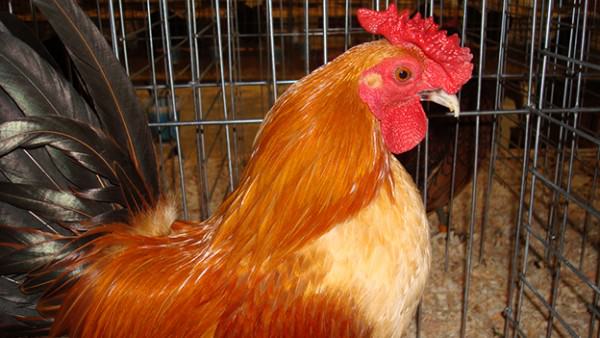 Use: The Nankin is a bantam chicken breed used primarily as exhibition fowl, though the hens are decent layers of tiny, delectable, creamy-white eggs. The breed is very broody and excels as surrogate hatchers.

History: The Nankin is a naturally tiny chicken breed that originated in Southeast Asia, but it was imported to England prior to the 1500s. It was named for the ancient inland seaport of Nanking (now Nanjing), located on the Yangtze River in east-central China. The breed was widespread throughout Europe by the 18th century, particularly in England, where Nankin hens were used to brood pheasant, quail and partridge eggs. In the mid-1800s, however, the breed started to decline.

Conformation: Nankin cocks weigh a mere 24 ounces and hens weigh 20 ounces. The chicken breed is recognized by the American Bantam Association and comes in shades of Chestnut with black tails and black in its wings. There are two Nankin varieties differentiated by comb type: one has a large, five-pointed comb and the other a medium-sized rose comb ending in a single spike. The comb of each Nankin variety, especially that of the large-combed variety, is prone to frostbite, making the chicken breed unsuitable for far-northern climates.

Special Considerations/Notes: Nankins are calm, ultra-friendly chickens; some say they’re the best of all barnyard pets. They mature quickly and are easy to rear. They thrive in confinement and tend not to wander when allowed to free-range. The petite Nankin is listed as Critical on the American Livestock Breeds Conservancy’s Conservation Priority List.