In this excerpt from "The Healthy Vegetable Garden," author and gardening expert Sally Morgan looks at using predators to control pests in the garden. 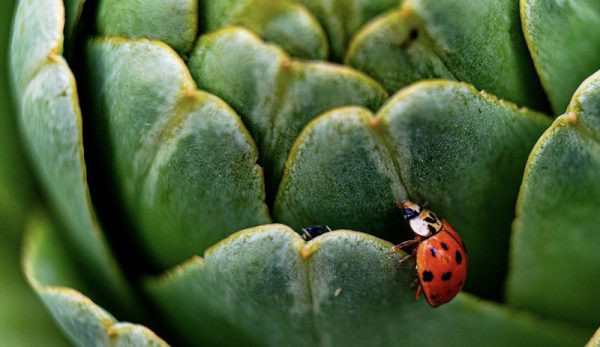 The following excerpt is from Sally Morganâ€™s new book The Healthy Vegetable Garden: A Natural, Chemical-free Approach to Soil, Biodiversity and Managing Pests and Diseases (Chelsea Green Publishing, September 2021) and is reprinted with permission from the publisher.

Natural predators are important in all habitats, natural and artificial. In nature, the populations of wasps, ladybugs, spiders and birds have long regulated the abundance of pests. For example, in a stable forest ecosystem, predators keep 90 percent of the arthropod herbivores below outbreak levels. Spiders control Douglas fir tussock moth caterpillars and birds will prey on gypsy moths. Under normal conditions, predators can prevent outbreaks when pest numbers are low to moderate, but problems can arise when there is a change in the weather or a natural disaster, such as a fire, flood or drought, which causes the balance between the prey and predator to be disrupted.

Much research has been carried out on pest-predator relationships and it is clear that systems with a low biodiversity are particularly vulnerable to pest outbreaks. This is what we must try to avoid in our gardens. In my own growing space, I am aiming for a mosaic of habitats in order to attract a wide range of beneficials to prey on different types of pests. Over the last 10 years, I have seen a steady increase in biodiversity and now itâ€™s not unusual for me to wander around the garden and spot a variety of predators. I still have pests, of course. In order for these predators to thrive, there must be some prey animals, so I have had to learn to live with low levels of pests to keep my beneficials fed! A key challenge, though, is to make sure that there are enough predators around early in the growing season to control the problem aphids, whitefly, red spider mite and various larvae, so that their numbers donâ€™t spiral out of control. The peak season, as far as pests in the garden are concerned, is early summer, so you need the beneficials to multiply rapidly to take advantage of the food bonanza, and this needs to continue through mid-summer. You can achieve this by understanding their life cycles and dietary requirements as well as providing the right plants and over-wintering habitats to enable them to thrive. Clearly, itâ€™s also very important to be able to identify predators at each stage of their life cycle.Â

Read more: Check out our review of The Healthy Vegetable Garden!

Itâ€™s important not to overreact when you see pests. For example, you might notice that your broad beans are smothered by black fly and decide that you need to do something quickly to prevent serious damage to the crop. But this is where you have to be careful. If there are lots of prey around, it is likely that you already have increasing numbers of predators, as the predators will lag behind the prey in the population stakes. If you are tempted to â€˜take the nuclear optionâ€™ and use a chemical spray, you may well take out both prey and predator and, in doing so, you will destroy the natural cycle and wonâ€™t then have any chance of being able to get back some natural control. It is best, if you can, to be patient, let nature takes its course, and wait for the predators to â€˜kick inâ€™. If you canâ€™t wait, check carefully for any predators on the plants before using an organic product or simply use your fingers to remove or squash the pests.

I once read an article that described the actions of the parasitoid wasps as being far worse than any science-fiction movie! The scene of the creature bursting out of its living host in the film Alien may seem far-fetched, but it is happening every day in your garden, albeit on a much smaller scale. Thereâ€™s a vast range of parasitic predators, or parasitoids, in the garden. The adult lives a normal, independent life, but their larvae hatch inside another living organism, consuming it and growing. This benefits our gardens if the host is a pest species. Usually, the host dies as or before the parasitoid emerges to live their adult life. Among the most common parasitoids in the garden are parasitic flies and wasps. Some parasitize a range of hosts, while others seek out specific hosts. The larvae feed on the host and then pupate, either inside or out, before emerging as an adult. The adults generally feed on nectar and pollen.

These are not the annoying houseflies and bluebottles, but bristly flies that are mostly grey-black in color, with short antennae and huge eyes, but no biting mouth parts. They lay their eggs on leaves, so the host either eats the eggs or the newly hatched larvae as it feeds. They parasitize hosts such as caterpillars, sawfly larvae and leatherjackets. Once the host dies, the larvae continue to eat the remains before pupating and over-wintering. One of the UKâ€™s largest flies is Tachina grossawhich parasitizes caterpillars; it is so large that it is often mistaken for a black bumblebee.Â

Wasps and bees belong to the order Hymenoptera: insects with two pairs of wings and a distinctive narrow waist. There are honeybees, bumblebees, solitary bees and social wasps, but remarkably, of the UKâ€™s 7,761 species of Hymenoptera, around 6,500 are parasitoid. Parasitic wasps vary enormously in size, ranging from a millimeter to 30mm (1Â¼in) long. Many females have an ovipositor, a sting-like attachment at the end of the abdomen, which is used to pierce the body of the host and lay eggs. Their hosts are mostly butterfly and moth caterpillars and pupae, and sawfly larvae.Â

Itâ€™s easy to spot the larger Ichneumonids, but the small wasps tend to go unnoticed. Both inhabit our gardens. Like parasitic flies, the parasitic wasps can attack the eggs, larval and adult stage of the host. Once the parasitoid egg hatches, the larvae feed on the hostâ€™s body tissues, taking the fat stores and non-essential organs first, as they donâ€™t want the host to die too soon. Once their larval stage is complete, they pupate. Some will pupate outside the dead host, others inside. Among those most commonly found in gardens are the tiny braconid parasitoid Cotesia glomerata that looks like a flying ant and parasitizes the caterpillars of the large white butterfly.

Chalcid wasps (pronounced â€˜kal-sidsâ€™) are just 3â€“9mm (â…›â€“â…“in) in length. You can identify them from the swollen femur on the hind pair of legs and their glossy metallic colors. Because of their size, the number of chalcid wasps is often underestimated, but they are incredibly useful. They lay their eggs in the eggs and larvae of flies, beetles, moths, butterflies, leafhoppers, thrips and scale insects. Occasionally, you may spot one tapping leaf surfaces with its antennae in search of their hostâ€™s â€˜scentâ€™, but the presence of sick or dead hosts is a sure sign you have a healthy population of chalcids. Many of the smaller parasitic wasps are used as biocontrol in glasshouses.

Not the most popular of insects, but we need to encourage this insect because itâ€™s such a useful predator! There are eight species of social wasps in the UK, and they are both pollinators and predators. Their life cycle starts in autumn, when a mated queen hibernates in holes while the rest of the colony dies. She becomes active in spring, finds a nest site, and starts building the nest and laying eggs. Four weeks later, the first generation of workers emerges. The workers hunt for insects, especially caterpillars, to feed to the larvae, while the workers themselves feed on the sugar-rich secretions of the larvae. Social wasps are valuable predators in the garden, as they help to control the numbers of insect pests. But, by late summer, there is a decline in the number of wasp larvae and the supply of food for the workers dries up. Then they have to seek out sugar, which results in damaged fruits and conflict with people.

Spiders are generalist hunters and have a varied diet. One important fact is that they tend to kill more prey than they eat, so they are incredibly useful in spring when they can limit their preyâ€™s early population growth and generally exert a stabilizing effect. A garden can have a surprising diversity of spiders, which is important since the failure of one species wonâ€™t affect pest control if there are others to take its place. You can boost spider diversity by covering the soil with mulch, especially straw, and building log piles and bug hotels.

The fast-moving centipede is found in leaf litter, under pots, logs and in the compost heap. Centipedes use their jaws to inject a paralyzing venom into their prey. Itâ€™s easy to distinguish between the centipede and the closely related millipede, as centipedes have a single pair of legs per segment while millipedes have two. Even millipedes are not harmful; they mostly eat dead and decaying matter, which is why they are found under the bark of rotting logs and in the compost heap, so they have a useful role to play. Itâ€™s only occasionally that they will be tempted to feed on seedlings.

This invertebrate has a poor reputation but, on balance, it is broadly beneficial and adds to the predator diversity in the garden. Many gardeners trap earwigs with upturned clay pots on sticks stuffed with straw, especially around dahlias because they can damage the flower buds, but their benefits far outweigh their disadvantages. They are scavengers, predators and pollinators. They feed on dead and decaying matter, for the most part, but they will also prey on aphids, snails and other small pests and help to control codling moth on fruit trees. If earwigs are causing a problem around your young crops and flower beds, use live traps and move them to a log pile.

Toads prey on slugs and snails, grasshoppers, ants, flies and other invertebrate animals. They live away from water as an adult, digging out a shallow burrow in which to shelter and overwinter in deep leaf litter and log piles. You will also find toads in compost heaps, so itâ€™s essential to do a toad check before you stick your fork in it. Frogs are similar in many respects to toads but are more agile, and they eat a similar range of prey. They hibernate over winter in pond mud or under piles of logs, stones and leaf litter. Both frogs and toads need water to breed so, if you want to encourage frogs and toads, then building a small pool is the answer.Â

If you live in a more rural area, itâ€™s not uncommon to find grass snakes, slow worms and lizards in the garden. I have found grass snakes under piles of compost in the hoophouse, and gardeners frequently report seeing them under sheets of metal and finding their eggs in compost heaps. Grass snakes are useful predators, eating insects and small mammals, but they do take frogs and toads, which make up the bulk of their diet. Slow worms emerge from their shelters at dusk or after rain, to prey on insects, slugs, snails, worms and spiders.Â

To encourage reptiles, you need to provide an open sunny spot where they can bask in the sun. I put down corrugated metal sheets and broken pieces of slate, which grass snakes and slow worms can sun themselves on or shelter under. Lizards enjoy a sunny wall or pile of rocks in a sunny spot. The heat of a compost heap will attract the reptiles, too. Think about hibernation places as well, such as an undisturbed pile of rocks, log pile or pile of leaves.