Sometimes people ask our mom, "What is your favorite bird?” They think she’s kidding when she says "the vulture,” but she’s not. 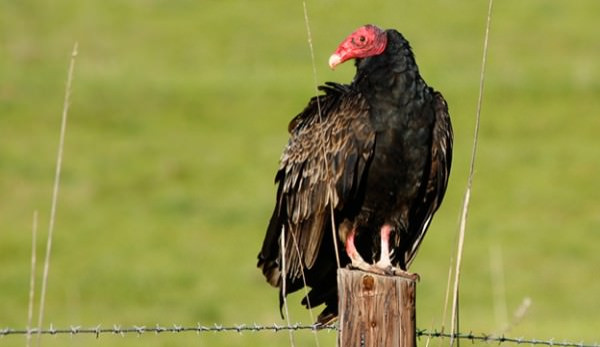 Sometimes people ask our mom, “What is your favorite bird?” They think she’s kidding when she says “the vulture,” but she’s not.

All vultures’ heads are bare and warty looking. They’re bare because vultures sometimes stick their heads inside of a dead animal’s body to pluck out tasty morsels. Feathered heads would get gooey and disgusting, but bare heads don’t.

Some people think vultures are repulsive, but they play an important role in keeping our countryside clean. Vultures’ stomachs contain strong digestive enzymes that kill bacteria and viruses, so by eating animals that died of sickness, they halt the spread of disease.

People sometimes worry about vultures stealing and eating small dogs and cats. Turkey vultures almost never kill live animals, and if they do, it’s never anything bigger than baby rats, game-bird chicks and small fish. Black vultures, on the other hand, are scarier because they’ve been known to attack small prey, such as newborn lambs and kids, but they, too, prefer to feast on fairly fresh dead meat, preferably the carcasses of large herbivores, such as cattle, horses and sheep.

If you see vultures circling over your farm, it’s not necessarily because something died. They might be searching for food, playing or gaining altitude for flight. Vultures aren’t pretty viewed up close, but in the air they’re as graceful as eagles.

Vultures soar on rising thermals of air. This conserves their energy in flight. They flap their wings to rise into a thermal and then glide as far as they can before they need to gain altitude again. Turkey vultures are easy to identify in flight. They hold their wings in a shallow dihedral, or V-shaped, angle and glide for long distances. The undersides of their wings are black or dark brown in front and silvery white behind. Black vultures fly with their wings more level, in quick, laborious beats alternating with short glides. They’re smaller, with shorter tails and a 5-foot wingspan compared to 6 feet for a turkey vulture. The undersides of their wings only have white at the tips. Turkey vultures have red heads, and black vultures’ heads are black.

You might have heard vultures called buzzards, but they aren’t. Buzzards are Old World raptors similar to our red-tailed hawk. Historians think colonial Americans were the first to call vultures buzzards. Because no vultures are in England, they called the birds soaring above their settlements by a familiar name.

A group of vultures is called a venue, but when they’re flying the group is a kettle. Vultures are gregarious, so you’ll nearly always see them in groups.

A neat thing vultures do is face the sun while roosting in trees or standing on the ground and then they spread their wings. They’re drying their wings and warming their bodies, though the ancient Egyptians, who revered vultures, thought they were saluting the sun.