Navajo-Churros have a lustrous fleece composed of a strong outer layer and a soft undercoat which is low in lanolin. The open locks and wide color range make Navajo wool ideal for hand spinners and weavers. . 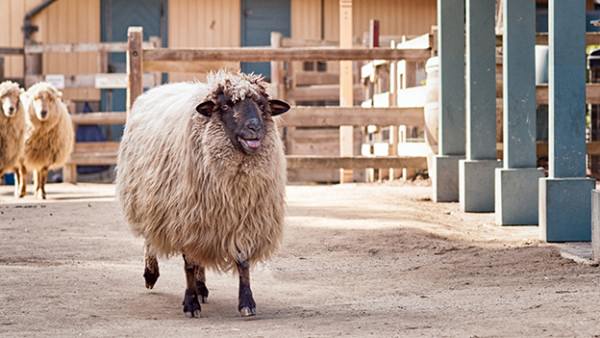 Use: Navajo-Churros have a lustrous fleece composed of a strong outer layer and a soft undercoat which is low in lanolin, making it easier to wash, card, spin, and weave.  The open locks and wide color range make Navajo wool ideal for hand spinners and weavers.  The meat of this multi-purpose breed is delicious and surprisingly lean, although they yield a fairly small carcass.

History: The rare and beautiful Navajo-Churro, the first breed of domesticated sheep brought to the New World, is one tough survivor.  The roots of this breed extend way back to Churra sheep brought from Spain by Spanish conquistadores back in the 1500s.  The Spanish prized the Churra – later altered to Churro — as a hardy and adaptable source of food and fiber, and the sheep spread to ranches all along the upper Rio Grande Valley.  Native Americans eventually obtained their own flocks by trading with (and raiding) Spanish settlements.  Herding these sheep and weaving their wool into rugs and other textiles soon became an important way of life for the Navajo, a primarily agricultural people.  The 1800s, however, almost saw the breed’s extinction, as many of the sheep on Hispanic ranches became cross-bred with fine wool rams and the U.S. army, in retaliation for raids on white settlements, decimated the Navajo’s flocks.  By the 1900s, thanks to more breed “improvements” and stock reductions, only a few remnant flocks remained in remote New Mexico villages and canyons in the Navajo Reservation. Luckily, some devoted breeders came to the Churro’s rescue during the 1970s. Today, the American Livestock Breeds Conservancy classifies the breed as threatened, with an estimated global population of less than 5,000 animals.

Conformation: While most Churros on the Navajo reservations are white, the wool of this genetically diverse breed can display a gorgeous variety of earthy colors:  black, gray, rust, brown, beige.  The outer coat has a long staple length of six to twelve inches.  These long-legged and long-tailed sheep are one of the few breeds that carry the polycerate gene; they can sport two, four, or even six horns (they can also be polled).  Mature rams weigh about 120 to 175 pounds, while ewes run around 85 to 120 pounds.

Special Considerations/Notes: The harsh conditions of the American Southwest have molded the primitive Navajo-Churro into a hardy, adaptable, easy-to-keep breed that excels on range and marginal land. They’re highly resistant to disease and parasites, and the ewes lamb easily, tend to twin, and make passionately protective mothers. Well adapted to dryer climates and rough ground, these sheep require more frequent hoof trimming when kept on lush, soft pastures. In wetter climates, they also need their wool sheared twice a year.