Need a Reason to Cook With Lard? We’ve Got You Covered

Resurrect lard, the cooking fat from generations past, and discover the flavor and nutrition it can bring to your kitchen. 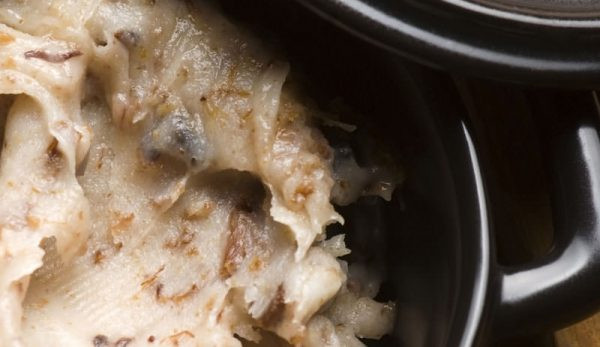 Lard: It’s a food that draws oohs and aahs from some but looks of disgust and unfamiliarity from others.

The rendered fat of pigs, lard was once the fat of choice for home cooks because it was inexpensive, readily available and adaptable to many cooking techniques, including baking and frying. Suet and rendered beef fat, as well as rendered goose and duck fat, were also common before the days of modern grocery stores.

When food scientists created vegetable shortening in the early 1900s, lard began to fall out of favor among home cooks who preferred to keep up with the latest trend. Innovations in pork production in the 1950s reduced the fattiness of pigs and subsequently limited the fat available for lard production. The low-fat movement led by nutritionists sealed the deal, and by 1970, Americans no longer commonly used lard.

Now, 40 years later, lard is experiencing a revival. “The demand for lard has definitely had a spike in the last six to 12 months,” says Jamie Smith, of Bluescreek Farm Meats in Columbus, Ohio. “More and more people are asking about and experimenting with lard.”

Foodies are on to something. “Lard is a source of vitamin D, which many, if not most, people are deficient in these days, and it contains monounsaturated fat,” says Winnie Abramson, naturopath and blogger at Healthy Green Kitchen. Non-hydrogenated lard also has zero trans fat and less cholesterol than butter, and modern dietary organizations, such as the USDA and the World Health Organization are starting to recommend whole animal fats in moderation, especially when compared to trans-fatty acids.

Many of lard’s healthy fats are lost in grocery-store lard products and even lard from some commercial butchers, who hydrogenate, bleach and deodorize it to make it more shelf-stable.

Fortunately, lard can be rendered—aka extracted through a melting process—at home with no special equipment and just a little time. Heritage-breed livestock farmers and people who buy whole heritage-breed animals have a special interest in turning excess fat into lard because heritage-breed hogs often have thicker fat layers than factory-farmed pigs.

Lard makers must start with the right product. Smith recommends using pork leaf lard, the fat which hangs next to the hog’s kidneys. “It’s the same for lamb, as well, which is what some people use instead if they don’t eat pork or if they are looking to use it for soaps, lotions or other cosmetic products,” she adds. Any excess fat trimmed from muscle can also be used.

“[In] the unrendered state, lard is as likely to go bad as a pork chop,” Smith says, so refrigerate or freeze the fat until you’re ready to process it into lard.

Rendering fat from pieces of pork, beef or poultry is as simple as melting it completely to separate it from the flesh. Begin by trimming any muscle protein from cold fat pieces, then cut, shred or dice the fat into small pieces using a food processor or a sharp knife. Fat will cut or shred best when very cold.

Place fat pieces in a heavy-bottomed pot or pan. Add enough water to cover the bottom by 1 inch—as the water evaporates during cooking, it helps keep the temperature even so the fat does not scorch. You can cook the fat on the stovetop, in an oven or in a slow cooker. Turn heat on low (200 degrees F in an oven) and slowly warm the fat until it reaches a very low simmer, just hot enough to melt but not burn. It should never reach a temperature over 350 degrees F, which is high enough to deep-fry or bubble vigorously. If the fat seems to be getting too close to scorching, add 1/2 cup additional water, repeating as necessary. Choose a ventilated space to work in, as the fat will smell strongly of cooked meat.

Pieces of cooked tissue, called cracklings, will float before settling on the bottom. Skim these out several times during the cooking process with a skimmer or slotted spoon. These porky crisps can be used as croutons on salad or as a garnish for soup.

After 30 to 90 minutes, the fat will fully separate from the cracklings and liquefy. Turn off the heat, and allow the lard to cool for up to 1 hour. Pour the liquid lard through a clean towel- or cheesecloth-lined sieve to separate out any remaining cracklings. Pour the liquid lard into a nonreactive container, such as a glass jar. As it cools, it will solidify and become snowy white.

“I store homemade lard in glass jars in the refrigerator,” Abramson says. “For long-term storage, I put in the freezer.” She makes leaf lard, the highest quality lard, for pastries and occasional frying. Lard, like all fats, can pick up off flavors from other ingredients during storage, so cover tightly and use within six months for best flavor.

“Rendered beef, lamb and pork fats are very different in texture and flavor,” Smith says. Beef tallow tends to be meatier in flavor and has a solid texture, while lamb is tender and delicately gamey. Fat rendered from duck or goose, called schmaltz, has a pleasantly meaty flavor and is nearly liquid at room temperature. Pork leaf lard will be nearly flavorless and unctuous in texture; lard made from excess pig fat will taste slightly porky.

Like beef tallow, lard has a high smoke point, meaning it will not smoke or burn until nearly 425 degrees F. This makes lard a great choice for pan or deep frying. For crispy fried chicken and flavorful fries, simply melt rendered lard in a high-sided pot. A spoonful of lard in a pan of roasted vegetables or potatoes melts into a tasty, velvety sauce.

Traditionally, lard was used in America as a spread for sandwiches or bread. Eastern European cuisine still features salted, spiced and sometimes herbed lard as spreads. Chefs like Jonathon Sawyer, of The Greenhouse Tavern in Cleveland, are renewing this custom by including animal-fat schmears on their bread boards.

Pastry chefs around the world also agree that lard makes the finest crust. It’s solid at room temperature, making the resulting pastry pliable and easy to form. Because lard is 100-percent fat, it creates an exceptionally crisp and flaky texture with a pleasing mouthfeel. There’s no residual flavor if you use leaf lard, while regular pork lard adds a pleasant meatiness to savory crusts.

Join the revival and learn to love lard, the nutrition-packed fat that’s easy to make and use at home.

This article originally appeared in the January/February 2014 issue of Hobby Farm Home.