This stinkbug relative has an appetite for more than kudzu—and it might try to stow away in your home this winter. 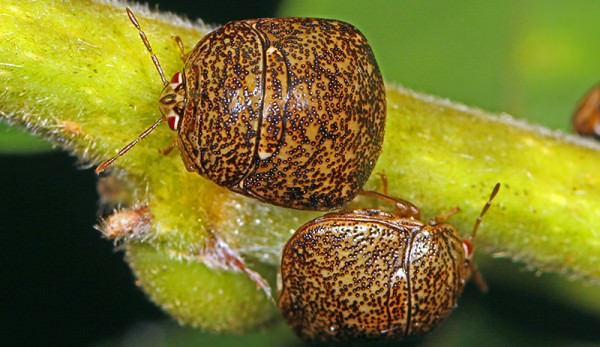 A new arrival from China or India, the kudzu bug has taken hold in the southeastern United States. First spotted in the state of Georgia in 2009, this unwanted immigrant has been spreading to nearby states and is now found as far north as Virginia and Maryland. If you are unfamiliar with this invasive pest, it is time to study up, as it is quickly migrating to any nearby regions that support the kudzu vine, which this insect thrives on. While an insect that feeds on the noxious kudzu plant might seem to be a boon, it brings a lot of unwanted challenges for farmers, gardeners and homeowners.

The kudzu bug is a relative of the stinkbug and is often confusingly identified as a beetle. Adult insects are nearly square in shape and roughly the size of a ladybird beetle, nearly 1/4 inch long. It exhibits a dark speckled olive brown coloration and features a piercing and sucking mouthpart that is common among its “true bug” relatives.

An Appetite For More Than Kudzu

Besides the kudzu patch, this pest will feed on several other plant species, including important economic crops like soybean, green beans, peanuts and butter beans, as well as ornamental plants, like wisteria. Like their stinkbug cousins, the kudzu bug does not eat the vegetation directly. Instead, it uses its specialized mouthparts to consume the sap of the plant, which leads to browning of leaves, dropping of flowers and leaf dieback.

If kudzu bugs are causing damage in your home garden it will be pretty obvious because these insects tend to be found in large numbers. While small green beans and butter beans crops may be affected, the worst damage is to commercial soybean farmers who can face significantly reduced yield when their fields are inundated by the kudzu bug.

In addition, the kudzu bug can be a major annoyance to homeowners, as they often try to overwinter in structures, like other invasive insects from the same region, such as the well known Asian ladybug and the ever popular brown marmorated stinkbug.

Aside from physical removal, there is not much small-scale farmers and gardeners can do about these pests. Organic insecticide sprays containing the active ingredient pyrethrin may have some efficacy, but most organic treatments do not seem to fare well. If indoor overwintering is an issue in your home, the best plan is seal all exterior cracks on the dwelling and use the vacuum cleaner to collect the insects that make it inside.