Audrey Pavia Keeping farm animals in the city can be a real hoot. Follow freelance writer Audrey Pavia’s adventures in Southern California with a yard full of urban livestock, including horses, chickens, a Corgi and an urban barn cat. She somehow manages all these silly critters by herself while working full-time. And you thought “The Simple Life” […]

Audrey Pavia
Keeping farm animals in the city can be a real hoot. Follow freelance writer Audrey Pavia’s adventures in Southern California with a yard full of urban livestock, including horses, chickens, a Corgi and an urban barn cat. She somehow manages all these silly critters by herself while working full-time. And you thought “The Simple Life” was out there? City Stock – New Arrivals – Urban Farm Online 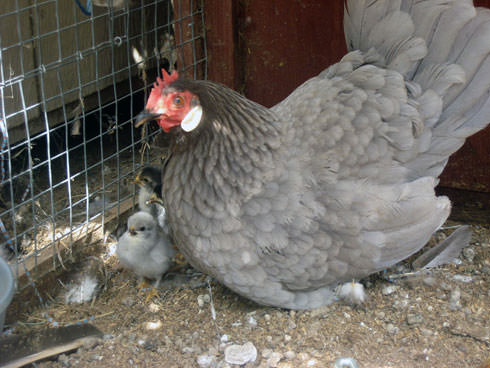 One of my hens is now a mom.

It takes 21 days for a chicken egg to incubate. Iâ€™ve discovered that 21 days goes by very fast.

Three nights ago, I went to close the door of my chicken coop. The chickens were on the roosting pole as usual. As I shut the door, I heard peeping. It was coming from the outside section of the coop. It was the distress call of a baby chick.

One of my hens was sitting on eggs in the coop for weeks. Three weeks, it seemed, because when I got a flashlight and searched for the source of the peeping, I saw a tiny, light-gray ball of fluff.

The chick was wedged in a corner of the coop, and cried whenever she heard a sound or felt the coop move. I searched with the light deeper into the indoor part of the coop and saw the hen sitting where Iâ€™d last left her, on top of a pile of eggs.

The night was cold and the baby chick was in trouble. Without Mommaâ€™s heat, she probably wouldnâ€™t make it.

I reached my hand in and picked her up. She was the size of a tangerine.

She felt cold, and I realized I was just in time. I crawled halfway into the coop and put the baby underneath the hen, who squawked in protest at being touched.

The next morning, I raced outside to see what might be going on in the coop. I found my usual crew anxious to be let out, in addition to Momma hen and three tiny babies.

The brood consisted of the tiny gray one I had helped the night before, and two other darker chicks. Their markings and colors were interesting, and I really couldnâ€™t tell which of my two roosters had sired them. The gray one was clearly the runt, and had apparently gotten trapped on the outside of the coop the night before because she was too tiny to jump up to the 3-inch high opening to the inside of the coop. I remedied that situation immediately by putting an upside ashtray to create an extra step for her.

The last few mornings, Iâ€™ve had a very hard time tearing myself away from the coop. After letting the other chickens out, I feed Momma and babies and give them fresh water. Watching the babies take their cue from the hen, who is teaching them to eat, is fascinating. They imitate everything she does. And when they drink, they tip their heads so far back, they nearly fall over.

In a nutshell, they are the cutest little things I have ever seen. I just hope they are all hens.