A new two-stage ditch design wins awards for innovation and is already being implemented without fail across the Midwest. 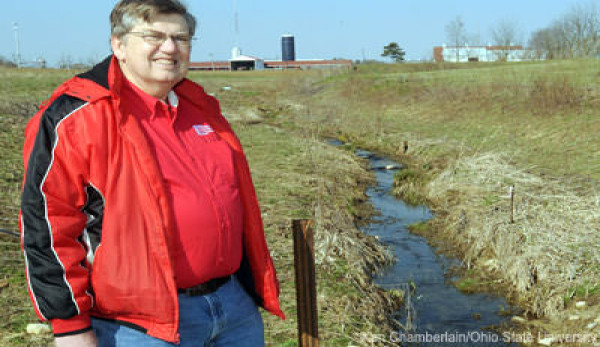 Farmers often create ditches in their fields to drain excess water and improve crop production; however, the conventional trapezoidal-shaped ditches are often too small for big stormwater flows and too big for small flows. A scientist from The Ohio State University took notice of this problem and has developed a more effective “two-stageā ditch design.

Andy Ward, agricultural engineer at OSUās College of Food, Agricultural, and Environmental Sciences, noted how expensive it can be for landowners to upkeep the conventional ditch design (a V-shaped ditchĀ with a narrow, flat bottom), costing approximately $450 per mile per year, as well as creating erosion problems and destroying plant and animal life. In his new design, a small main channel is located at the bottom of the ditch (stage one), and raised, grass-covered benches flank both sides (stage 2). Much like in a natural riverās floodplain, overflows from the main channel are picked up by the benches, which are high and wide enough to keep runoff from topping the banks and flooding surrounding farmland.

Since Ward and his team created the two-stage ditch design, it’s been used to build 20 drainage ditches across the Midwest. Thirty more have been built by Ward’s former students and graduates of his design workshops. So far, none of the 50 has needed maintenance.

Joint research between Ward and scientists at the University of Notre Dame has shown the design reduces the export of nitrate-nitrogen from fertilizers into rivers, lakes and streamsāan added benefit that can save farmers money and improve water quality. In addition, the Army Corps of Engineers has proposed building several miles of two-stage ditching to try to stop recurring flooding problems in northwestern Ohio.

Wardās work has garnered attention from the Ohio Agricultural Research and Development Center, which presented him with the “2013 Innovator of the Year Award,ā meant to honor scientists who have shown leadership in innovation and entrepreneurship.Ā

“The concept is changing long-held perceptions of what constitutes a ‘good’ drainage ditch,” one of Ward’s nominators wrote.