A relative of Rhode Island Reds, New Hampshires are primarly raised for meat. 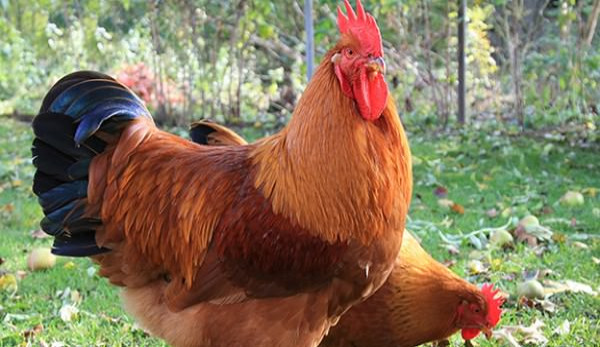 Use: New Hampshire is a dual purpose breed created primarily for meat production and to a lesser extent egg production. They are rapid feathering and quick growing good layers of brown eggs. New Hampshire breeding figured heavily in some the original broiler breeds in the 1950s.

History: This breed was developed over a period of several years from Rhode Island Reds. Poultry farmers from New Hampshire continuously selected for early maturity, rapid growth, increased size and hardiness. There is no record of any outside blood being introduced. New Hampshires were first admitted to the American Standard of Perfection in 1935. They are listed in the American Class.

Conformation: Although they were developed from Rhode Island Reds, New Hampshires are much lighter in color and have a body type more closely resembling Australorps than Rhode Islands. There is only one recognized variety although a New Hampshire White was developed in Europe. They have a Single Comb and yellow skin. Standard Weights: Cock: 8 lbs., Cockerel: 7 Â˝ lbs, Hen: 6 Â˝ lbs., Pullet: 5 Â˝ lbs.

Special Considerations/Notes: Although selection in New Hampshires for meat production has fallen off in recent years, there is still great potential for this breed to become useful as an alternative to the conventional broiler or to be used in terminal crosses for small farm broiler production.