If you feel like you’re on annual autopilot when it comes to your Thanksgiving menu, give gratitude for the opportunity to transform classic fall-garden ingredients in new holiday-inspired ways. 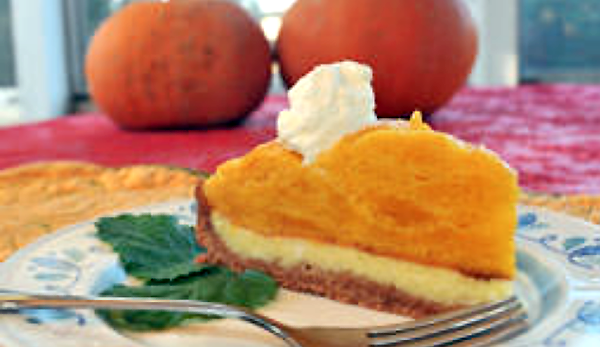 If you feel like you’re on annual autopilot when it comes to your Thanksgiving menu, give gratitude for the opportunity to transform classic fall-garden ingredients in new holiday-inspired ways.

Take pumpkin pie, for example. While there’s no bad pie in our book, traditional pumpkin pie that reaches back to Pilgrim times isn’t our personal favorite. It’s not quite sweet enough and is a dash too heavy for post-turkey consumption. But we love the flavor and raise lots of pumpkins on our farm in Wisconsin. After growing elongated New England Pie and Long Pie pumpkin varietals (we stack them on our front porch like cordwood), we discovered that pie pumpkins glow with flavor, not jack-o’-lantern candles.

While pumpkin and mousse might seem like dance partners from different dessert planets (dropping a pumpkin on your toe hurts, but a mousse, by its culinary definition, is light and fluffy), our recipe for Pumpkin-mousse Cheesecake transforms garden bounty, like pumpkins, into a new tradition that’s so delicious your kids won’t know they’re “eating their vegetables.”

Crust
In food processor (or in plastic bag with rolling pin), crush graham crackers. This should result in about 1⅓ cups graham crackers. Mix in sugar, and drizzle in melted butter until crumbs clump together. Press into lightly oiled 9-inch spring-form pan.

Cheesecake
Cream-cheese layer: In mixing bowl, beat cream cheese until fluffy. Beat in eggs, one at a time, and mix in sugar until well-blended. Spread cream-cheese mixture over crust and bake at 350 degrees F for about 25 to 30 minutes or until firm. Cool completely.

Pumpkin layer: In saucepan over medium heat, mix egg yolks with pumpkin purée and cook until thickened. Stir in 1/2 cup sugar, milk, cinnamon, nutmeg and salt. Turn heat to the lowest possible setting (or off if using electric stove), and let sit on burner for 5 minutes. Remove from heat and cool completely.

Serve with dollop of whipped-cream topping.