New potatoes are basically any potatoes that have not been cured, and they have benefits regarding space, time and profitability. 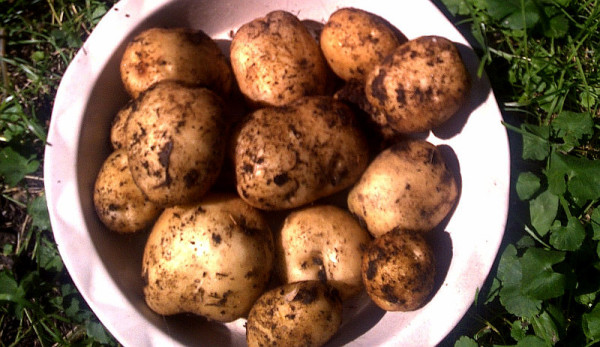 One crop I never put enough thought into, year after year, is the new potato. I always regret the oversight. A ‚Äúnew potato‚ÄĚ is really any potato that has not yet been cured. New potatoes can be large or small but they are typically available in the early spring. Customers seek them for their sweetness to be used in potato salads (though they are good mashed, boiled or fried, too). Many other benefits of new potatoes on the market table make them ideal for farmers to grow, so let‚Äôs look at a few of the main reasons every market farmer should consider growing new potatoes.

Having a few specialty crops that you can get on you market table early is key to starting the season right. For us, it‚Äôs always green garlic, lettuce, spinach and radishes, but adding new potatoes to the mix can help really round out your offerings. Chefs will love having the jump on potato season, while customers will appreciate having an early spring crop they can easily recognize.

Unlike potatoes that are in the ground three or four months before you can harvest them, you can start to pull new potatoes an entire month before their full-size counterparts. In fact, if you are so ambitious, you can grow them under cover‚ÄĒin a greenhouse, high tunnel, low tunnel or caterpillar tunnel, for instance‚ÄĒand easily start to have new potatoes one or two months before anyone else.

In order to produce reasonable yields for regular potatoes, you need to plant them at 10 to 12 inches in rows two or three feet apart. New potatoes, meanwhile, can be spaced more tightly (eight inches), even fitting two rows per 30-inch bed. They should be fertilized accordingly, especially if spaced tightly, but they could also be intercropped with a fast growing radish or turnip.

I highly recommend harvesting some of your new potatoes early and marketing them as ‚Äúmarble potatoes‚ÄĚ for chefs. If you do this, you can plant your potatoes very close together as they will not need as much space to produce a decent crop. Plus, these tiny tubers can fetch a much greater price than your average potato or new potato. In fact, new potatoes almost always are accompanied by tiny round spuds, so you should separate these and sell them as a different product.

Because new potatoes are so fast, and because you can cram them into smaller spaces than regular potatoes, your ability to profit from them increases. This is a valuable thing when it comes to limited space, because you need to make sure that your time is going toward crops that can make you money, pay for your labor and not take up too much space or time to grow.

Generally, I don‚Äôt recommend reusing potato seed. Potatoes bred for and sold as seed potatoes are generally more productive and specifically bred to avoid disease issues that reusing your potato seed can cause. However, if you didn’t have any disease issues the season before, new potatoes may be an opportunity to put any leftover potatoes to use. Note that I would still plant your new potatoes away from where you plan to grow your main potatoes if possible, just in case of disease, but using your own seed can reduce the cost of producing new potatoes and save you some money.