I'm building a planting terrace at the sunniest part of my garden. 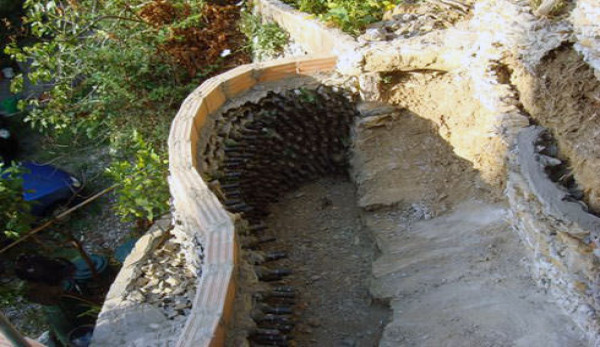 A large part of building a garden on a cliff involves jockeying for sun exposure. Unfortunately, the far-left side of the garden, where there is a bit more dirt and fewer rocks, does not get as much sun exposure as the far-right side does. Itās also a bit steeper on the right side, meaning that any terrace construction has to be fairly heroic.

I am almost finished with a gardening project that kicked off in the month of August: constructing a big new terrace in the sunniest zone. I used to have a loose rock wall built here on a ledge of rock that cuts across the cliff face. I tore down the old rock wall and built a big, lower wall of bottles and concrete that curves out and triples the planting area of the terrace. I used about 500 bottles to build the lower wall. In some places, itās fairly tall, being about 7 feet at the maximum.

You can see the old rock ledge inside the yet-to-be-filled planting area. I actually used a sledgehammer and chisel to chip away more than a foot of the rock ridge. After I fill it all with dirt, the soil surface will be 2 feet above the rock ridge. Iāll put the walkway in the bed up against the wall in such a way as to minimize the amount of the planting area with the ridge underneath. In the deep areas of the bed, the soil will be 7 feet deep before it reaches the native soil/rock mix.

To finish the potted plants section, I have a wall to build on top, and one of the beds on the far left is still built of the old birdnest system that I used for the first building of each of the beds, so Iāll need to fix that, too.

As for big projects, though, I think getting rid of the old rock ledge will be the last major planting area Iāll construct for the garden. I have a few more steps to add here and there, and a little expansion in the shady-plants area, but 95 percent of the main construction is now finished.

The end of this project is still a ways off because now, I have the huge job of filling the area with soil. I have a location picked out on one of the upper ridges where I can dig up dirt and sift the rocks out to make fill dirt acceptable for the planting terrace. Iāll add a bunch of organic material such as manure, compost and old leaves, to it. Iāve already started filling one end of the bed, but I estimate it will take at least another 400 buckets full to fill the bed to the top of the brick edging. The dirt will settle a foot or so during the first year, since I will have added new soil to all the planting areas after the first year.

With the fall season just around the corner, I find myself eager to wrap up this late-summer gardening project. As rewarding as itās been, Iām looking forward to spending more of my time pampering plants than carrying sod.