A Cornell breeder who developed a tomato resistant to thrips and tomato spotted wilt virus continues her research to make the new variety available to small-scale farmers. 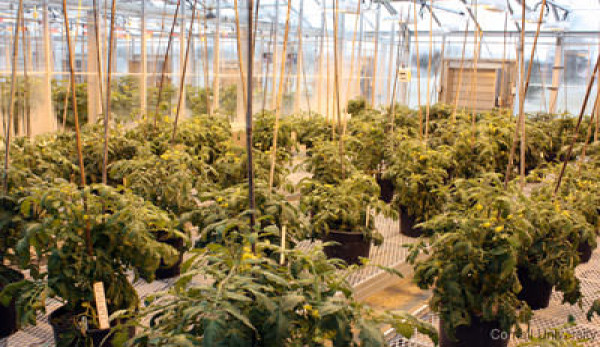 In the battle against thrips, Cornell breeder Martha Mutschler-Chu has developed a new weapon: a tomato that packs a powerful one-two punch to deter the pests and counter the killer viruses they transmit. The “dual-resistantâ€ť varieties (warding off both insects and viruses) might reduce or even eliminate the need for pesticides in several regions.

Thrips are tiny insects that pierce and suck fluids from hundreds of species of plants, including tomatoes, grapes,Â strawberries and soybeans. They also transmit diseases, such as as the tomato spotted wilt virus, causing millions of dollars in damage to U.S. agricultural crops each year.

Adapting a novel form of insect resistance discovered in a wild plant native to Peru, Mutschler-Chu, professor of plant breeding and genetics, first isolated the resistance. She found that it was mediated by droplets of sugar esters, called acylsugars, which are produced and exuded from hairs (trichomes) that cover the plants. The acylsugars donâ€™t kill the insects, but deter them from feeding or laying eggs on the plants. The process does not require genetic modification and is considered by Cornell to be completely safe.

After successfully transferring the resistance into new lines and breeding out undesirable traits, Mutschler-Chuâ€™s team added a second layer of protection: one or both of two natural genes known to resist the so-called topsoviruses, which include tomato spotted wilt virus.

“If some thrips get through with the virus, the virus resistance genes are there to mop it up,â€ť Mutschler-Chu says.

The Cornell thrips-resistant tomato lines, with and without the virus-resistance genes, will be used by Mutschler-Chu and an interdisciplinary team of eight other scientists from seven other institutions nationwide as part of a new five-year, $3.75 million project to control thrips and topsoviruses in tomatoes. The project is funded by the USDAâ€™s Agriculture and Food Research Initiative and is led by entomologist Diane Ullman of the University of California, Davis, and plant pathologist John Sherwood of the University of Georgia.

Mutschler-Chu says the collaboration will allow her to test the varieties in different regions and use the feedback to further refine breeding lines and create new, improved ones. Whether it be altering sugar levels to suit different environments, or tweaking virus resistance, Mutschler-Chu wants to discover the best package for insect and virus control. Her discoveries will be shared with seed companies so they can transfer the traits into their varieties.

“It brings us closer and closer to something that can be used commercially to essentially eliminate the need for pesticides in many growing regions,â€ť Mutschler-Chu says.

The project rests on a foundation that was built over 20 years, supported by college-level funding and federal Hatch grants. During that time, new tools of molecular biology were developed, from PCR-based genetic markers and single nucleotide polymorphism markers to the sequencing of the tomato genome. Using the new methods, it took Mutschler-Chu 10 years to develop the first tomato line with enough acylsugar, then four years to create a better series of 30 lines.

The impact of her research could be far-reaching, she says. Not only would it be a boon to the U.S agricultural economy, it could also have significant impact in the developing world, where tomatoes are one of the most popular vegetable cash crops, especially for small-scale subsistence farmers.

“This is even more critical, because they donâ€™t have the resources to buy pesticides, and there is often misuse of pesticides,â€ť Mutschler-Chu says.