Photo by Judith Hausman With added North African spices, this stew is full of flavor. A meal for the new year, I think, should be comforting on one hand (What happened to 2012?) but also enlivening and piquant (What’s going to happen in 2013?) on the other. My friend and great cook, Debbie, served this […] 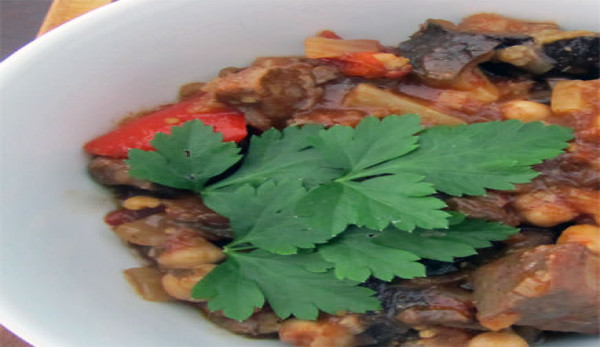 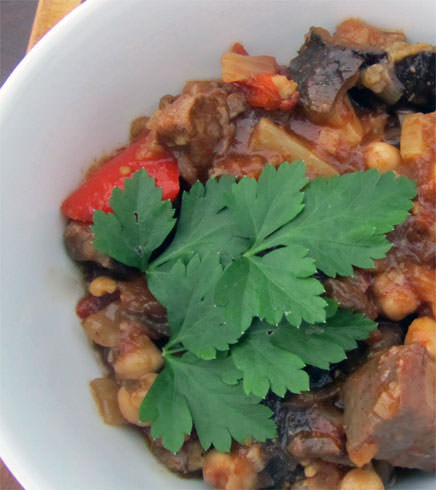 With added North African spices, this stew is full of flavor.

A meal for the new year, I think, should be comforting on one hand (What happened to 2012?) but also enlivening and piquant (What’s going to happen in 2013?) on the other. My friend and great cook, Debbie, served this delicious stew on the night before New Year’s Eve, but any time this week would be appropriate.

It’s also convenient because it’s best made in stages and tastes better after a resting day, anyway. This allows you to defat the lamb. Local, grass-fed lamb is of course best and can be cut from a leg of lamb (save the bone to make a scotch broth with barley) or use lamb stew meat, which will take longer to become tender.

The spices are an approximation of baharat, an Arab spice mix, which can vary. If you find the real thing, substitute 2 good teaspoonfuls of it for the cinnamon, clove and coriander and reduce the paprika to one teaspoon. Add the cumin and cayenne, though. If you’re lucky (and your freezer wasn’t emptied by Superstorm Sandy like mine was), you may have some frozen peppers from your garden or some onions in cold storage.

Rice, couscous, bulgur or quinoa would each make a good soak-up-the-juices companion for this stew. I brought a green salad with avocado, grapefruit slices, a little red onion, walnuts and olives along to the meal as well.

Now take heart, take stock and sit down to the table with friends. Happy 2013.

Put the lamb (with all ingredients under “For the Lamb”) in a heavy, ovenproof pot in a 350-degree-Fahrenheit oven with enough water to cover. Braise, covered, for two hours or so or until very tender. Remove vegetables, cinnamon and bay leaf. If you have time, cool the lamb and broth and skim the fat from it. Keep broth.

In a large, heavy pot, in the butter or oil, cook the eggplant, peppers, onion and garlic until softened. Season with the seven spices listed and cook a bit longer to blend spices. Add remaining ingredients, except the parsley or cilantro garnish, and cook on low until the eggplant and parsnips are almost cooked through.

Add in the reserved lamb and broth. Add more water if too dry. Heat gently until the parsnips and eggplant are soft, garnish and serve.