Audrey Pavia
Keeping farm animals in the city can be a real hoot. Follow freelance writer Audrey Pavia’s adventures in Southern California with a yard full of urban livestock, including horses, chickens, a Corgi and an urban barn cat. She somehow manages all these silly critters by herself while working full-time. And you thought “The Simple Life” was out there? 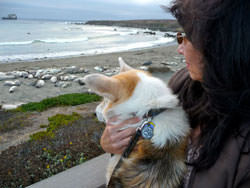 Nigel felt right at home in Carmel, one of the most dog-friendly towns in California.

When dogs live on farms â€” even urban farms â€” they often get stuck at home. They have plenty of room to run, so why take them anywhere?

But just like urban farmers, urban farm dogs need to get away sometimes. Thatâ€™s why I decided to bring Nigel along on a weekend trip I took with a friend to Carmel, one of the most dog-friendly towns in California.

Carmel is famous for its quaint downtown, its beautiful shoreline and its fine restaurants. But half the fun is getting to Carmel if you live near Los Angeles, like I do. The most memorable part of the drive is up picturesque Highway 1, which hugs the rugged coast of Central California.

Along the way, we stopped at Hearst Castle, where Nigel paid his first ever visit to a museum. Although the Hearst Castle tours were over for the day by the time we arrived, we were able to see the small museum at the entrance to the estate. It felt weird walking through a museum with a dog in tow, but it seemed to be okay. No one threw us out.

Just past Hearst Castle, we came upon Seal View Point, a small overlook just above a sandy beach that was literally covered with elephant seals. Nigel is pretty jaded since heâ€™s seen just about everything there is for a dog to see in his 11-plus years on earth. But the barking and shimmying of the elephant seals caught his eye, and he couldnâ€™t stop staring at them.

When we arrived in Carmel, we stayed at the Hofsas Hotel, a lovely boutique hotel in the heart of town. Our room not only had an ocean view, but also a special dog bed, treats and a flying disc â€” all for the canine guest in our party. Nigel fell madly in love with the bed and slept on it the entire weekend.

Nigel also had the opportunity to dine at the Abalonetti Bar & Grill in nearby Monterey, on Fishermanâ€™s Wharf. A doggie menu came along with the people menus, so I ordered Nigel a chicken breast, served on a complimentary flying disc. He gobbled it down so fast, we couldnâ€™t even get a picture of him eating it.

Our last day in this dog-friendly town, Nigel strolled along the sidewalks taking in the many shops and restaurants in town. We then took him to Carmel Beach, where he romped off leash with scores of other dogs. Once he was tired out, it was time for the long drive back to Los Angeles.

Nigel is back to being a farm dog, but he is no doubt richer for his most recent experience on the road.