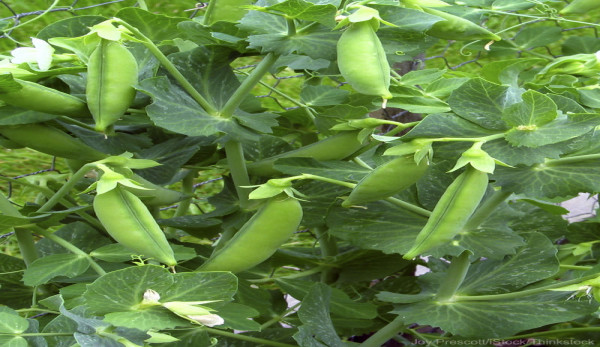 New garden- and dry-pea breeding lines developed by USDA scientists and their collaborators might offer growers added insurance against Aphanomyces root rot, a disease that can cause crop yield losses of 20 to 100 percent in peas.

The mold-like pathogen Aphanomyces euteiches, which causes the disease, infects the roots and underground stems of susceptible pea plants and other legumes, rotting them and causing stunted growth, lesions, wilted leaves and other symptoms. Fungicides aren’t an option, so growers must either avoid planting in fields with a history of the disease or switch to growing non-host crops until pathogen numbers drop to acceptable levels.

However, avoidance and crop rotation is not always economically feasible. Furthermore, breeding peas for resistance to Aphanomyces has proven difficult because multiple genes are involved, according to Rebecca McGee, a plant geneticist with USDA’s Agricultural Research Service at the Grain Legume Genetics Physiology Research Unit in Pullman, Wash.

The resistance genes are also associated with undesirable traits, which cultivated varieties can inherit when crossed with wild germplasm sources, McGee says.

As an alternative, McGee, ARS geneticist Clare Coyne and other colleagues sought to develop pea germplasm lines that naturally tolerate the pathogen, but donâ€™t suffer the same ill effects as susceptible plantsâ€”particularly not significant yield losses.

The pea lines are descendants of an inbred population of plants derived from an ARS cross made in 1993 between the Dark Skin Perfection cultivar and 90-2131 germplasm line. Besides their tolerance of Aphanomyces root rot, the lines were also chosen for their acceptable agronomic characteristics.

Incorporating the tolerance trait into elite varieties could prove especially beneficial to growers in the Pacific Northwest and north-central states, where Aphanomyces outbreaks threaten the valued role that peas and other legumes play in cereal-based crop rotation systems.

Read more about this research in the November/December 2013 issue of Agricultural Research magazine.