Results from a USDA study show that no-till management of spring cereal crops can reduce soil losses from wind erosion in the Pacific Northwest. 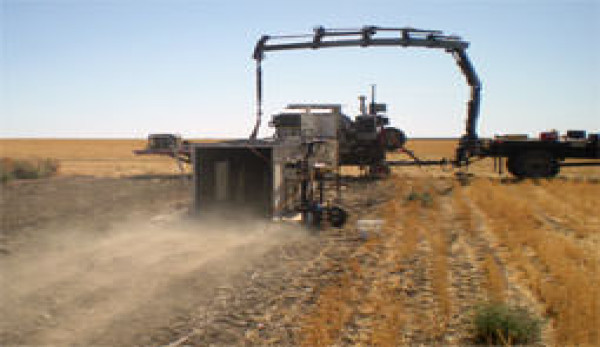 Studies by USDA scientists show some no-till management systems can lower atmospheric levels of PM10â€”soil particles and other material 10 microns or less in diameter that degrade air qualityâ€”that are eroded from crop fields via the wind. These findings could help Pacific Northwest farmers reduce erosion from their fields and assist communities in complying with federal air-quality regulations.

Farmers in the inland Pacific Northwest favor winter-wheat/summer-fallow production systems so that crops can germinate and grow during late summer and fall.Â Controlling weeds and conserving soil moisture during the summer can require up to eight tillage passes, which produces a dry, loose layer of fine soil particles that can be easily eroded by strong summer winds.

The scientists found that in the spring, soils in spring-barley and spring-wheat rotations were wetter than soils in traditional winter-wheat systems. In late summer, the spring-barley rotation also had more standing stubble than the other two rotations. The stubble helped keep soil on the ground and out of the air. Spring-wheat/spring-barley rotations also resulted in soils that had larger and more continuous pore space, higher water infiltration rates, higher saturated hydraulic conductivity and higher drainage rates.

Findings from this work were published in the Journal of Soil and Water Conservation and Soil & Tillage Research in 2011.

Read more about this research in the July 2012 issue of Agricultural Research magazine.