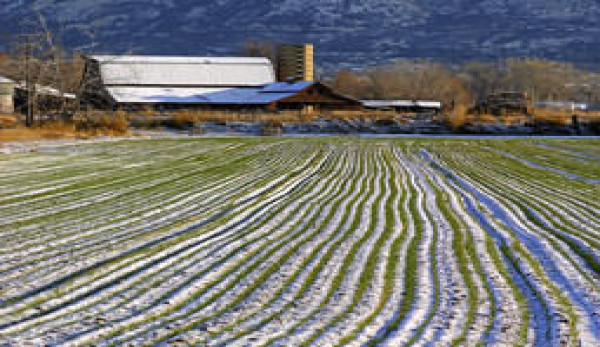 A smooth blanket of snow in the winter can help boost dryland crop productivity in the summer, and according to USDA research, no-till management is one way to ensure that blanket coverage.

Through a series of studies on two neighboring farms in Washington, soil scientist David Huggins, with USDA‚Äôs Agricultural Research Service, determined how standing crop residues affect snow accumulation and soil‚Äôs water levels across entire fields. Both farms have the hilly topography typical of the Palouse region in eastern Washington, but much of one farm has been under continuous no-till management since 1999, while the fields on the other farm were conventionally tilled. For two years, snow depths, density and the soil‚Äôs water storage were measured manually at hundreds of points across the fields on both farms. Residue height at data collection points was also measured on the no-till fields.

Producers affected by the 2012 drought might also benefit from using no-till methods to increase the amount and uniformity of snow cover on their fields. This would increase soil‚Äôs water-recharge rates and moisture storage, which would facilitate the return of drought-stricken fields to their former productivity.

Results from this work were published in 2011 in Transactions of the ASABE.