Try these responsible, humane methods to evict raccoons, skunks, groundhogs and other nuisance wild animals nesting a little too close to your home. 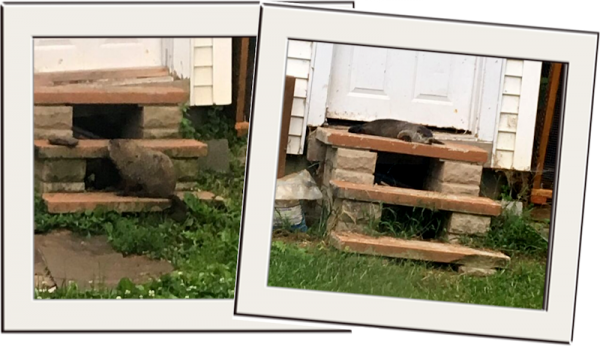 Whether it’s refilling nectar feeders or setting out suet cakes and seed, many of us make efforts to attract wild creatures such as hummingbirds and woodpeckers.

But we’re understandably less welcoming when a groundhog takes up residence under the chicken coop. Same when a pair of skunks holes up in the crawl space.

As contiguous forested land is increasingly broken up for development, some wild animals have a tougher time finding suitable habitat. That means exposed nooks and crannies on your property might seem even more enticing.

Once mammals move in, they can do significant structural damage to foundations and prey upon certain types of livestock, too. Fortunately, you can remedy these issues without poison, glue traps or other lethal methods.

â€śNo-killâ€ť traps have their place, but they also can cause extra problems for you and any animals you wish to relocate. For example, if you trap an animal, but you fail to check on the no-kill trap regularly, your distressed captive could starve to death, injure itself or become ill.

Or, let’s say the animal inside is alive and well. What then? Depending on your local laws, releasing a wild animal elsewhere might not be legal. What’s more, if the animal to be relocated is carrying parasites or disease, you could unintentionally sicken healthy wildlife by adding your nuisance animal to that population.

Still, if you have one or more feral cats to contend with, no-kill traps are idealâ€”especially when you use them in conjunction with a trap-neuter-return program such as Alley Cat Allies.

If your nuisance animal isn’t caring for young, you can persuade it to move along by making â€śitsâ€ť spot much less cozy. If you can, set up a bright light to fully illuminate the entrance and interior of the inhabited area. Next, saturate the area with a citrus-heavy essential oil such as orange or lemon.

Finally, if you (and your neighbors) can tolerate it, you can also hasten the animal’s departure by playing loud music near the entrance or further inside the inhabited location. Taken together, these steps usually work quickly to send unwelcome visitors on their way.

Got an attic full of bats? Or an animal that looks noticeably ill? Better call in some reinforcements.

In the case of those bats, for instance, certain species might be listed as threatened or endangered in your area. If you’re in the U.S., you can contact the appropriate U.S. Fish and Wildlife Service office in your region for guidance. You can also get in touch with your state conservationist.

Sometimes, nuisance wild animals might carry rabies or other serious diseases. While some infected animals behave very aggressively, others might seem uncharacteristically tame. Keep your distance and call your local animal control department for assistance.

Once you’re certain your nuisance wild animals have moved out, carefully examine the area for potential points of animal entry and block them. This could entail tightly repacking freshly dug holes, repairing masonry cracks and crevices, or using small-gauge hardware cloth to prevent entry while retaining ventilation.

Also, if you store bags of bird seed or pet food outside, secure these in heavy-duty bins or garbage cansâ€”complete with bungee cords to keep especially dextrous raccoons out. If you have an open compost pile, consider keeping it contained instead. Making potential food sources more difficult to access helps dissuade wild animals from calling your buildings â€śhome.â€ť

Want to learn more about the humane management of nuisance wild animals? The Humane Society of the United States offers a free download of its comprehensive, 290-page book, Wild Neighbors: The Humane Approach to Living with Wildlife.

Wild Neighbors â€śprovides invaluable information to any homeowner who seeks to live in harmony with the wildlife in his backyard and in his community.â€ť The work contains in-depth information on more than 30 of the most common animals homeowners encounter, including bats, black bears, chipmunks, moles and deer. Wild Neighbors also presents specifics on identifying animal damage and choosing environmentally responsible solutions, among other topics