Oca: A New Tuber To Try This Year

Potatoes aren’t the only tubers fit for you dinner plate—try oca, found in array of colors. 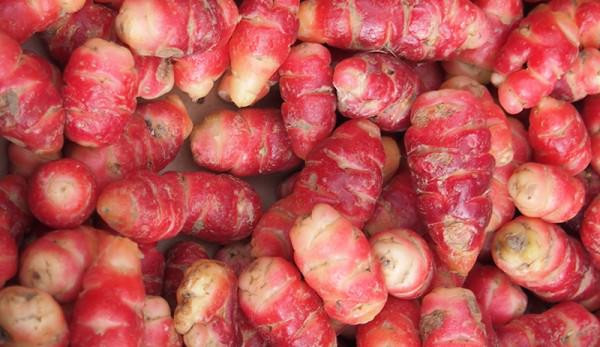 Although the mention of tuberous vegetables probably brings potatoes, yams, sweet potatoes and Jerusalem artichokes to immediate mind, there are many other tuberous roots that deserve a place on our farms and in our gardens. Yet many of these tubers remain undiscovered by growers.

Case in point: Oca. The starchy, underground tubers of the oca plant were a staple of Incan farmers, but few growers here in North America have it on their radar. With a long storage capacity and a nutritious punch, these multicolored tubers are easy to grow and harvest.

Oca (Oxalis tuberosa) is a perennial plant that’s closely related to the other species of Oxalis that are grown as common garden ornamentals. The oca plant has bright-green, three-lobed leaves that can also be added to salads, but it’s the tuberous roots that are most often used in the kitchen. The flowers are lovely, too. Their bright-yellow trumpets appear in the garden throughout the summer months.

There are many named varieties of oca found throughout the world, but those known as New Zealand yams are among the most popular here in North America. Some common varieties include Sunset, with its orange roots and a carrot-like flavor, Bolivian Red, with red and yellow skin; and the gorgeous pink tubers of Hopin.

To grow oca, purchase and plant tubers in the early spring. Because the plants don’t form their edible tubers until the days begin to shorten at the end of the growing season, oca isn’t harvested until early winter, making it an excellent crop for the winter pantry or CSA box. To get a jumpstart on the season, you can plant oca tubers in pots kept indoors under grow lights as early as March and then transplant them into the garden when the danger of frost has passed. Choose a well-drained site, and if you live in the south, pick a location with afternoon shade.

As the plant grows, you can bury the vining stems at 6-inch intervals to increase tuber production. More tubers will form everywhere the stem meets the soil. Keep the plants well watered throughout the growing season, and give them plenty of room to roam—each plant can grow 3 feet wide.

Because oca plants are not winter hardy in the north, they’ll need to be protected from early frosts to allow the plants to form larger tubers. Cover the plants with a plastic sheet until the end of December. Or better yet, plant them in high tunnels. If neither of these options is available, don’t fret. You’ll still get tubers; they just might not be as big. The longer you can leave the tubers in the soil, the better.

To harvest oca, dig or pull up the plants in late December or early January, when the plants naturally die back. Sift through the soil to reveal the tubers. They can range in color from creamy yellow or pale pink to a bright purple. Save the smaller tubers for replanting in the spring, and use the bigger tubers for cooking.

Store the unwashed, harvested tubers in a cool garage or basement on nursery trays or screens. You do not need to shield them from light, nor do they need to be stored in a particular way. Just let them sit on the counter in a cool room, and they’ll last several months before sprouting.

In the kitchen, oca can be boiled or baked. It can also be sliced and fried to make oca chips, boiled and mashed, or roasted in the oven. The tubers can also be sliced and eaten raw in salads. The flavor of most varieties has a hint of lemon, but as they cook, they become more nutty or squash-like in flavor.

You can source oca tubers for planting from the following companies:
Territorial Seed and Cultivariable.