Odds & Eggs: We Found An Egg-Collecting Apron For All Seasons

A crochet enthusiast made an egg-collecting apron for a friend. Now she shares the patterns for adults and kids on her website. 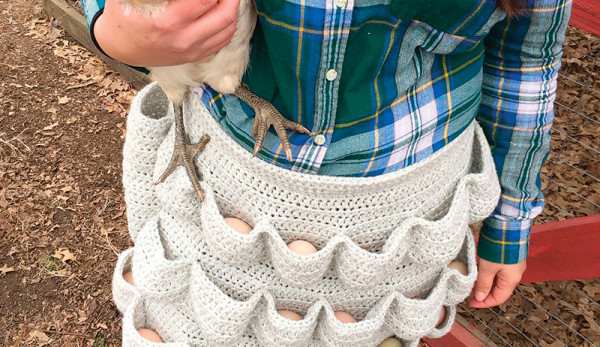 We love unexpected egg-ceptional ideas, so when we came across blogger Ashlea Konecnyâ€™s egg-collecting apron on her website called Heart Hook Home, we had a good cackle.

While Konecny doesnâ€™t have chickens yet herself, she enjoys creating new crochet patterns for others.

â€śMy friend, Cassy (pictured below), has 30 chickens and harvests dozens of eggs each day,â€ť she says. â€śHer old method of gathering eggs was cumbersome so I created a new apron design for her. She loves it.â€ť

The online response was so great that Konecny followed up the original with a child-size pattern.