Guests of this grassfed beef ranch in the Southwest get a real taste of ranch living—and some prickly-pear syrup, too! 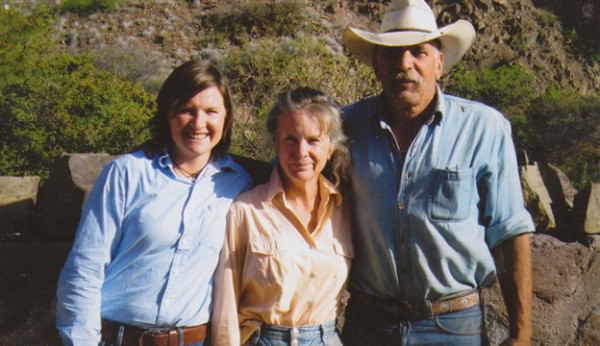 With 10,000 acres located 20 miles east of Clifton, Ariz., in Mogollon Rim Country, Cold Creek Ranch is a working cattle ranch that specializes in 100-percent grassfed beef. Its owners, the Schwennesen family, has had roots in this part of the country since 1921, when Otto M. Schwennesen returned from World War I with lungs damaged from German gas attacks and was sent to the Veterans’ Hospital at Fort Whipple (now Prescott) for treatment. Although the Schwennesen family property has been a ranch for many years, it opened its doors to guests in 2011.

The ranch is part state land, part National Forest and part privately owned. Originally established in the 1870s as part of the larger Davis Ranch, Cold Creek is named for the stream that carries two other creeks from their confluence to the Gila River.

Originally, ranching in the area was extensive, with few neighbors or competitors. Today, ranching is intensive and limited, with many regulation constraints, explains Eric Schwennesen, the current ranch owner. “[Water is in short supply, and] everything else waits on that. If it doesn’t rain, nothing happens,” he says

Clifton been the heart of the cattle and mining region since the 1880s. Supreme Court Justice Sandra Day O’Connor grew up on the nearby Lazy B Ranch, and the area is also said to be the birthplace of Apache Chief Geronimo. But this way of life—and the communities based on it—is dying out fast.

“Mining and ranching are about all we have in Clifton,” Schwennesen says. “Clifton and the other scattered towns in the area were built to supply the growing, dynamic needs of livestock and mining industries over a wide region. … Our town depends on [Cold Creek’s] success as much as we do.”

As far as he’s concerned, this requires a good education but also a lot of hard work. Schwennesen and his wife, Jean, are no armchair ranchers, even though between them they hold two bachelors and three master’s degrees. “We learn from other people in the business, from the very scattered system of pastoralists around the world,” Schwennesen says.

Too far to have reasonable access to electrical lines, Cold Creek Ranch is off-grid and generates its own power with solar panels and uses batteries to store energy. In the winter, the houses is heated with firewood, but in the summer, “you live with it,” Schwennesen says, referring to the notorious Southwestern heat. He has no regrets, though. “It’s a good life, close to the land,” he says.

One reason Schwennesen continued on the ranching tradition was to correct the negative public perception of ranchers. “Too few people understand land husbandry or the difficulty of it,” he says. “[Letting guests stay here] is a way to let them experience what it is like.”

The sincerity of his love of the land and passion for ranching rings loud and clear. Guests may participate in daily ranch work, which includes riding, feeding and shoeing horses; calling and moving cattle; roping and branding; or clearing brush. They also get to try Jean’s prickly pear syrup, a well-known treat in the ranch world, in which she uses agave syrup instead of sugar.

In addition to allowing the public to stay on the farm, Cold Creek Ranch directly markets meat locally. “There is absolutely no reason to ship halfway across the country,” Schwennesen says. “There are local producers who need the business and support in every state, including Alaska. We are not food extremists, however, just common sense folk.”

What brings guests to Cold Creek is its scenery, remoteness and legitimacy, Schwennesen says, emphasizing that it’s not a movie set. “The real deal is what we offer, actual work, a part in the management process.” However, the ranch’s “Weather Guarantee” states that any day with 0.35 inches of rain will be free for guests.

Easy day trips from the ranch include hot springs, Apache sights and world-famous Tombstone, Ariz., one of the last frontier boomtowns in the American Old West.