Your top questions about rams are answered in full detail—prepare to be wowed. 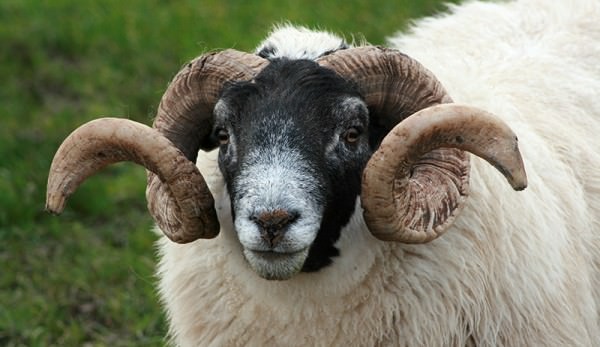 Rams can feel like a forgotten part of the flock. They often don’t hang around as long as other sheep do, becoming either wethers (castrated males) or, frankly, dinner. But questions about these enigmatic guys abound. In honor of rams’ favorite time of year—autumn breeding season —here are some of my favorite, frequently asked questions about rams.

Many flock owners think their eyes must be playing tricks on them, but it’s true: Sometimes the size and/or shape of a ram’s head will change. This happens in some breeds more than others. During breeding season—between late September and early January, depending on geography—rams’ noses may broaden and look thicker or bumpier. Their foreheads will appear to swell slightly and/or wrinkle up. This bulking up in the head supposedly protects rams from any breeding season bashing they may receive from other rams. Rams’ heads return to normal size in the spring.

No, and they can actually produce high-quality wool, though with a few caveats. Ram fleeces are neither consistently stinkier nor coarser and, when off the sheep, can be indistinguishable from that of a ewe or a wether, based on smell, sight and feel.

During breeding season, however, ram fleeces do have a stronger, muskier scent. (Fortunately, it’s nowhere near as strong or offensive as that of buck goats in rut.) This ram scent tends to peak during the fall. Because most sheep are not sheared until late spring or summer, the scent has long since been washed and/or carried away. If a ram fleece harbors any detectable odor, it’s quite mild and washes away during scouring, like so many other things in a fleece.

Testosterone can coarsen a ram’s wool, but only by about 1 to 3 microns (micrometer, or 1 millionth of a meter). In a given flock, however, ram fleeces are usually at least as fine as ewe fleeces, and often finer. Why? Because fineness of wool is one of several heritable traits that wool producers evaluate and consider in advance of breeding. One ram will breed with many ewes and pass genes on to many more lambs: Wool producers tend to select only the best rams for this great honor, and wool quality is a factor.

In some primitive breeds of sheep, hormones in rams may cause them to produce coarse or hairy wool in the neck, beard and/or britch (top of leg) areas. Ram fleeces also tend to get coarser as the sheep ages, but this can also be true of ewes. Wethers, by contrast, don’t have the hormonal ups and downs of rams and ewes. They tend to produce more consistent fleeces over the course of their lifetimes, barring issues like illness and malnutrition, which can affect fleece quality.

3. Is It Normal For Rams To Have Wool On Their Testicles?

Yes. Wooly testicles are perfectly normal in both ram lambs and older sheep, but this wool isn’t always retained and can shorten over time. A sheep shearer will carefully shear testicle wool away if it is present on shearing day. The quantity of wool in this area varies greatly by breed: Romney sheep, for instance, are notorious for having long wool (several inches is not unusual) here, while Shetlands do not.

4. Should Rams Be Kept Away From Other Sheep?

Yes and no. Except during breeding season, rams should be separated from ewes. Like all sheep, though, rams hate to be alone. They should be penned or accompanied by at least one buddy sheep, like a wether or another ram. Rams may fight one another, but they don’t always. Many rams live peacefully together in pairs or small groups. The degree to which they get along seems to depend more on the personalities of individuals than on shared maleness.

This peaceful coexistence may change as breeding season approaches. Rams may begin to physically challenge each other for hierarchy and breeding privileges. If they butt heads to the extent that they seriously injure one another, you may wish to separate them until breeding season is over. And remember: Never, ever turn your back on a ram.

5. Do Rams Have To Be Castrated?

No. You may not even bother if your rams are going to the butcher their first fall season. If you do not have a separate area for rams to be kept over the winter, however, you may wish to castrate them so that you can keep wethers and ewes together.

No. In some breeds of sheep, like Jacob, both rams and ewes have horns.

Yes. Some wethers become more ram-like as they age.