The iconic farm barn has taken on many forms for many purposes. Here's how to identify different types of barns as well as some common attributes. 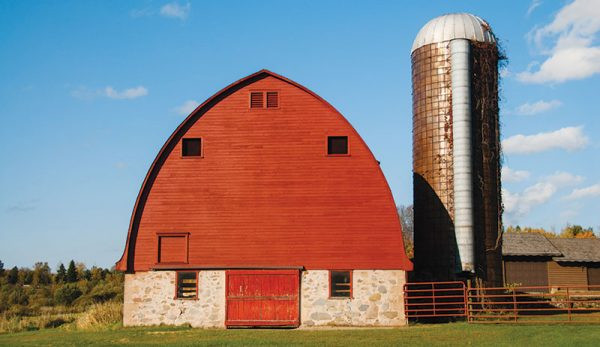 Is there any element of rural America more iconic than a glorious red barn? Barns hold a distinct place in the history of many farms, and they seem to transcend time. Other icons of farm life‚Äîtractors, trucks and other machinery‚Äîcome and go, replaced and upgraded as the years pass, but barns remain. A barn is a fixture of the farm‚Äîas essential to the landscape as the fields and the fences. Aside from an occasional fresh coat of paint or new roof, a barn can remain roughly unchanged throughout its existence.

The architecture of American barns varies widely, and the purpose of an individual barn typically determines its design. Just as farmers raise varying types of livestock and crops to fulfill different purposes, various common ‚Äúbreeds‚Äù of barns exist, each with a different story.

Once common throughout the southern and eastern U.S., tobacco barns were built with a specific purpose in mind: to cure harvested tobacco leaves. There are variations in exact style, but the major common goal in tobacco barns is to provide excellent ventilation for the drying tobacco.

Tobacco barns accomplish this through features such as long aisles and breezeways, tall doors and removable wall sections. In many vintage tobacco barns, you can still see the hanging racks for the tobacco.

Sadly for vintage building enthusiasts, old tobacco barns today are facing the danger of a slow extinction. As production of tobacco has decreased in certain regions or is actively discouraged at the state level, many vintage tobacco barns are unable to adapt to changing times. Unlike a hay barn that can still be used to house hay even in the 21st century, the tobacco barn‚Äôs shape and ventilation needs make it less usable for conversion.

Bank barns provide a fascinating twist on the basic idea of a two-level barn. The bank barn is typically built into the side of a hill so that the ground level comes up to the second story on one side. This allows for easy loading and unloading of hay or other materials into the upper level.

These barns often have trap doors leading to the livestock area below, designed for easy feeding. Occasionally, a bank barn utilizes a ramp for the same purpose.

When considering barn colors of the East and Midwest (and to a lesser extent, the West), it‚Äôs obvious that the iconic red coloring is what most people associate with barns. After all, a red barn surrounded by green fields is one the classic images of rural America. But why red? Other barn colors exist‚Äîthink snow-white dairy barns‚Äîbut not in the same numbers as red barns.

The original reason for the red barn stems more from practicality than from aesthetics. Before the 1800s, most barn wood was left natural and therefore took on a distinctly weathered look. Later, in an effort to preserve and protect barns for longer periods of time, barns began to be painted.

Naturally, most profit-minded farmers wanted only to protect the barn and didn‚Äôt care much about the color, and this is where red comes in. With some experimenting and recipe tweaking, an inexpensive paint was developed, consisting of lime, milk, linseed-oil and‚Äîthe secret ingredient for that red coloring‚Äîcommon iron oxide.

The choice to paint a barn red today is probably more aesthetic than economical. After all, barns are supposed to be red, right? It‚Äôs interesting to note, though, that the initial reason was because iron oxide was abundant and inexpensive.

A gambrel barn takes the basic English barn design (below) but incorporates additional angles into the roof trusses to create the iconic ‚Äúbarn roof‚Äù look that is so familiar. Increased storage capacity is the goal of the gambrel roof; the additional angles allow for more volume.

The increased storage might not seem as valuable today in the era of baled hay, but many of these barns were built before mechanical balers when hay was put up loose‚Äîpossibly as high as the ceiling would allow. A system of pulleys and tracks was often used on the ceilings to maneuver the loose hay. Gambrel barns are often built as two-level structures with livestock housing below and storage above. Some gambrel barn roofs‚Äîknown as Gothic or rainbow‚Äîcontain no angles but are rounded instead.

Early farmers in the United States borrowed elements from existing Old World designs, but these colonists made some modifications‚Äîbetter ventilation, for one thing‚Äîto accommodate livestock rather than just storing crops. Siding often runs vertically on these barns, which tend to be smaller; 30-by-40 feet is common.

Round barns are an oddity. Sometimes they‚Äôre perfectly round, other times more polygonal. They‚Äôre based on the fact that a circle holds more volume than a square, and thus a round barn allows for more storage space than a rectangle barn made of the same amount of materials. While this might be true, round walls make it more difficult to build interior infrastructure such as stalls, aisles, storage areas and separate rooms.

Round barns were also said to offer a more efficient workflow, but the idea didn‚Äôt really catch on with farmers. Round barn construction was on the decline by the 1920s.

Some Notes About Barn Details

Two common details seen across many different barns are widows’ peaks and cupolas.

Also known by the names ‚Äúhay hoods‚Äù and ‚Äúcrows‚Äô beaks,‚Äù these features are often found on hay barns with gambrel roofs. They are extensions, like the one shown in the left of the photo above, built off one end of the barn‚Äôs peak that allow the hay pulley rack to extend out into the farmyard and allow for easier access to the hay wagon.

Many old barns sport highly decorative cupolas near the center of their roofs, like the one shown above, and these mini structures are not simply for show. Most cupolas also played an important role in ventilation, eliminating excess moisture.