An Old Playhouse Converted To One Cool Coop!

When this Tennessee family decided to raise chickens and ducks, they converted an old playhouse into one very cool coop for their poultry additions! 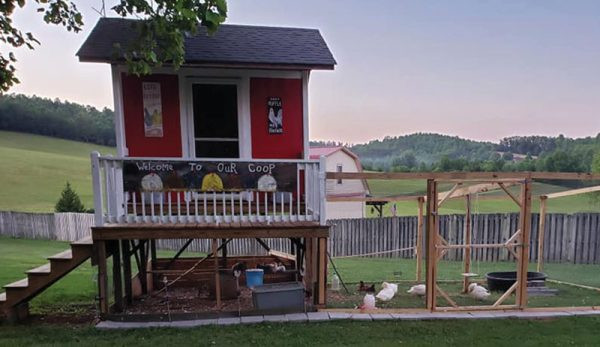 It started with two Rhode Island Reds and two Pekin Ducks that our son brought home after work one night in March of 2020. He was working at a local farm-supply store and had purchased these chickens and ducks on a whim.

When he arrived home, he grabbed some wood from the garage and fashioned a tiny makeshift chicken coop and run for them.Â  They lived in that modest abode in our garage for a few weeks and, well, of course we fell in love!

From Playhouse to Cool Coop

Our family discussed how and exactly where we would house and care for them, did some research, asked questions and began our adventure. We converted our sonsâ€™ old playhouse into a chicken coop and added a run.Â

We have four boys that enjoyed this playhouse for many years when they were younger. They often defended the fort, walked the plank of a pirate ship, slew dragons as brave knights, blasted off into space or tried to camp out all night until the coyotesâ€™ howls sounded just a little too close. Often between 1 and 3 a.m., the pitter-patter of fort defender and little pirate feet made their way to their bedrooms to finish the night in the comfort of their own beds.

Now, this space would breathe life again as we converted it into our â€śLittle Red Coopâ€ť for our new little feathered pirates.

The chicks and ducks needed a few different accessories than the boys once did. We used buckets positioned on a wooden frame for nesting boxes and added some roosting bars. We cut a hole in the bottom of the coop and added a walk plank for entrance into the coop.

Next, we added a run to the side of the coop and placed netting over the top to create a safe space from overhead predators. We first used chicken wire to contain the birds, then realized we needed more secure wire to keep predators out.Â

Then we, as every good chicken parent does, added a few more chickens, then a few more. Soon we realized the meaning behind chicken math! Boy that happened quickly!Â

We now use their eggs to feed those same young men that used to roam this playhouse area several years ago. While those little astronauts and dragon slayers might have grown up on us, we now create new projects with our young adult boys and make memories with our chicks and ducks in their new home.

As we continue to learn and grow, make changes as needed, our coop dreams have been a grand family adventure.

This article originally appeared in the November/December 2021 issue of Chickens magazine as a “Cool Coop” feature. Have a cool coop you’d like to share? Email us a short write-up (~250 to 500 words) about your chicken coop along with a few images to chickens@chickensmagazine.com with the subject line One Cool Coop, and include your name and mailing address. Check out Chickens magazine for current prizes and contest rules.