The olive harvest has started, and all over in the hills around here people have unfurled their harvest nets and are collecting olives. 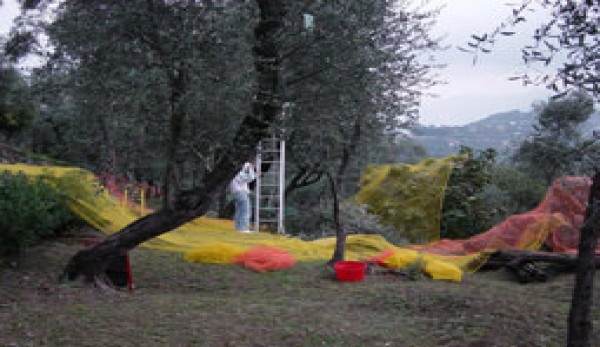 The olive harvest has started, and all over in the hills around here people have unfurled their harvest nets and are collecting olives. The most common technique is to roll up the big plastic mesh nets and string them in-between the trees.┬Ā When I first saw all these nets, I thought they were perhaps some strange sort of hammock, but then when olive season rolled around, I saw the nets unfurled and I understood that leaving the rolled nets attached to the trees was just a time-saving device. This is, in part, because the olive harvest can last five months, from October to February.┬Ā Some people spread the nets and then just let the olives fall naturally, skimming off the collected olives two or three times during the long harvest. Those who are a bit less casual will lay the nets out on the ground, and then collect all the olives on the trees during one big harvest.┬Ā Some olives are beaten off the trees with long bamboo poles, and other olives are harvested by hand with ladders to climb up into the tree tops.

This year is an exceptionally small harvest for olives. Last year was a huge harvest and most everybody still has a lot of oil left over from last year, so theyŌĆÖre not crying too much.┬Ā Personally, the small harvest isnŌĆÖt such great news. After the resounding success of my olive curing experiment last year, I was looking forward to curing 10 gallons or more of olives, but the places where I can usually find free olives to harvest are all empty this year. I may have to go help my friend Richard harvest his olives in order to justify mooching a sackfull of olives from him.

IŌĆÖm also having a hard time finding a source for some new gallon-sized, wide-mouth glass jars, which are perfect for curing olives. My compliment-winning olives last year were made by filling a big glass jar with olives and water and changing the water almost every day for about two months. I am a bit irregular in my method and didnŌĆÖt change the water for days on end a few times, but that didnŌĆÖt seem to matter. I sample tasted an olive or two every once in a while, and when the flesh seemed to have lost all the bitterness, which was almost two months after starting, I packed the olives in mildly salty water for a week and they were ready to eat.┬Ā

Most everybody just takes their olives to the frantoio (fran-toy-oh) where they are ground up and squeezed to make oil.┬Ā There are a dozen or more frantoios around here, and last year there were so many olives, it was difficult to schedule an appointment.┬Ā I heard about one friend who was thrilled to get an appointment at midnight. This year, things are different, and most of the farmers can just go to the frantoio without even scheduling an appointment.