Good for both you and your chickens, omega-3 fatty acids can be easily added to a flock's diet to improve poultry health and produce better eggs and meat. 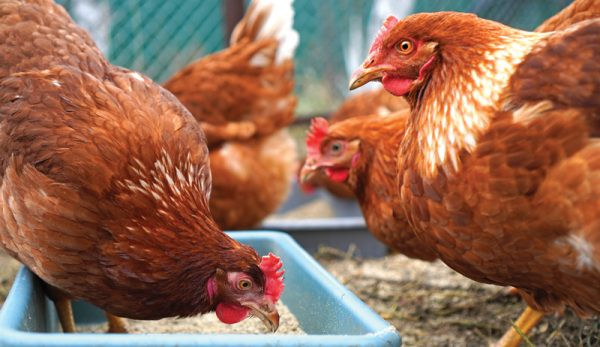 Your doctor wants you to take them for various reasons such as cardiovascular health and arthritis support. They may even lower the risk of certain cancers.

Well, now your veterinarian wants your chickens to take them, too!

Fats, also known as lipids, are a macro-nutrient in our diets, as well as our flockâ€™s diet.

Macroscopically, we can identify them as oils and see them as little droplets that bead up on the surface of water. They can be described as feeling greasy when touched.

On the molecular level, fats are composed of carbon and hydrogen atoms bound together. They are called â€śhydrophobic,â€ť which literally means â€śwater fearing.â€ť The term explains their biochemical properties of not mixing well with water or other electrically charged molecules.

They come in a variety of forms including fatty acids, phospholipids and steroids.

Fatty acids are composed of long chains of carbon atoms linked together. They can vary in how long they are but usually have 16 to 18 carbon atoms strung in tandem. The carbon atoms are linked to one another in this chain by either one or two bonds between each other.

The way these carbon atoms are bound dictates not only how they function but also how they are named.

Check out these flower essences that can improve your chickens’ health.

You can find omega-3 fatty acids in many food items. Some of the more commonly known foods that contain these are flaxseeds and various cold-water fish species such as mackerel, salmon, cod and herring.

For example, mackerel has a much higher content of omega-3 fatty acids than soybeans.

These fatty acids have been studied in humans extensively. There are hundreds of scientific papers available pointing to the numerous health advantages.

They are important for the developing fetus and contribute to the production of a healthy nervous system, immune system and eye.1

In adults, omega-3 fatty acids have benefits for the cardiovascular system. The American Heart Association points to studies that show they decrease the risk of arrhythmias (irregular heart rhythm) and blood clots leading to heart attack and stroke.

Additionally, omega-3 fatty acids lower blood pressure and triglycerides in the blood. And they will decrease the rate of atherosclerotic plaque development in vessels.2

They also reduce inflammation, which can be beneficial for helping with rheumatoid arthritis and degenerative joint disease.3

There are even links to aiding in the support of mental aliments such as depression and behavioral disorders. With all these advantages to health, itâ€™s no wonder doctors recommend them.

Studies of omega-3 fatty acid usage in chickens are not as extensive as the human literature. But there is some promising data available for them as well!

Veterinarians who work with chickens know that the prevalence of cancer in the reproductive tract of a hen is high. Some studies found that about 45 percent of female chickens develop reproductive tract cancers, while other studies have found even higher levels.4,5

The most common types of cancer seen are ovarian and oviductal adeno-carcinomas. They usually develop after a hen is 2 years of age.

In the beginning, signs associated with this type of cancer may be inapparent. It may not affect egg production. Nevertheless, as time goes on and the disease progresses, various problems can arise.

Egg production may start to slow down or abnormal eggsâ€”such as thin-shelled, small size or irregular shell textureâ€”may start to appear. Some hens may suffer from egg binding or even develop fluid within their abdomens as this disease progresses.

If fluid does start to build up in the abdomen, the hen may have a large, round belly and walk with her tail hung low. Some describe it as a â€śpenguin walk.â€ť

One other sign an owner may pick up on is their bird’s heavy breathing. If a bird has a mass growing or fluid building up in its abdomen, this will put pressure on the air sacs that are present branching off their lungs.

This can subsequently lead to an impaired breathing ability and an owner seeing their chicken taking much deeper or more labored breaths.

Ovarian and oviductal cancers can spread to involve other organs as well. If this happens, other signs may occur as well. Ultimately, this cancer can take the life of the chicken.

Here are 9 reasons your hen’s egg production decline (and what you can do.)

So, what can you do for your flock to deal with this common problem? Flaxseed supplementation may be a part of the answer.

In a study where flaxseed was supplemented as 10 percent of the diet over one year to hens ranging from 2 to 2 1/2 years of age, there was a significant reduction in the severity of ovarian cancer. However, the incidence of this disease remained the same.4

In a similar study with hens fed flaxseed as 10 percent of the diet from 6 months until 4 years of age, the severity and incidence of ovarian cancer significantly decreased.

With results like this, it makes sense why your veterinarian wants your chickens to get flaxseed in their diet.

Another great benefit of providing this fatty acid to chickens is that it causes the omega-3 content of the egg yolks and muscles to increase. This could be a benefit for people who not only eat their chickenâ€™s eggs but for those who also raise broilers for meat.

Additional studies have shown that the omega-3 fatty acid â€śdocosahexaenoic acidâ€ť will increase in the brains of chicks and embryos when the adults are fed 16 percent ground flaxseed or canola oil.10

Although little research has been done to expand upon how this may be beneficial for chickens, we do know that itâ€™s important for the development of mammalian brains and plays a role in cognition and behaviors. Therefore, it may be similar in chickens as well.

Of course, there are always down sides to everything, and itâ€™s no different for omega-3 fatty acids.

Body weight and feed conversion ratesâ€”how well a bird converts what it consumes into body massâ€”have been shown to be lower when omega-3 fatty acids are increased in the diet.9

There are other studies that show mixed results with some indicating there can be a decrease in egg laying with flaxseed supplementation. Others, though, have found no difference in egg production.

Although these may seem like negative side effects, if you want healthy hens, itâ€™s a small price to pay.

After all this great news about omega-3 fatty acids, the next question is how should you supplement them to your hens.

The easiest way to do this is to offer fish oil or flaxseed, as these are readily available in health-food stores and most supermarkets. Many feed-supply stores will also sell large bags of whole flaxseed or smaller bags of ground flaxseed.

If you choose to use fish oil, make sure you are using oil directly from capsules and putting it on your hensâ€™ food for them to ingest right away. Fish oil can start to break down upon exposure to the air due to oxidation and becomes rancid rapidly.

One downside to using fish oil is that it may cause the eggs to taste fishy.

In one study, people taste-tested eggs produced by chickens fed fish oil as 6 percent of the feed. It was determined that if the eggs were scrambled, they tasted normal. However, if they were boiled, they had a sulfur flavor.6

Other data states that the taste will remain normal when fish oil is no more than 1 1/2 percentÂ of the diet, but any higher may alter the flavor.8

If you chose to use flaxseed instead to supply omega-3 fatty acids, be sure to use either the oil or ground flax meal.

Additionally, in the previously mentioned studies where flaxseed reduced reproductive cancers, it was hypothesized that the omega-3 fatty acid content may not have been the only thing helping.

In that study, flaxseed meal was used, which contains not only omega-3 fatty acids but also phytolignans. These are beneficial as well, as they are considered to be â€śantiestrogensâ€ť and have antioxidant properties.

Based off of the previously mentioned research studies, itâ€™s recommended that flaxseed meal be added at 10 to 16 percent of the diet. If the average chicken is consuming roughly 110 grams of feed per day, then an owner should feed 11 to 18 grams of that amount as ground flaxseed.

Providing omega-3 fatty acids in the diet of chickens can be beneficial in many ways. These include aiding reproductive health, providing potential benefits for brain development and also allowing the consumers of chicken products to profit as well.

Itâ€™s great for their health and yours too! Your veterinarian recommends it, so what are you waiting for?