Once a Victory Garden

For 68 years, Dowling Community Garden has put the "community” in Minneapolis community gardening. 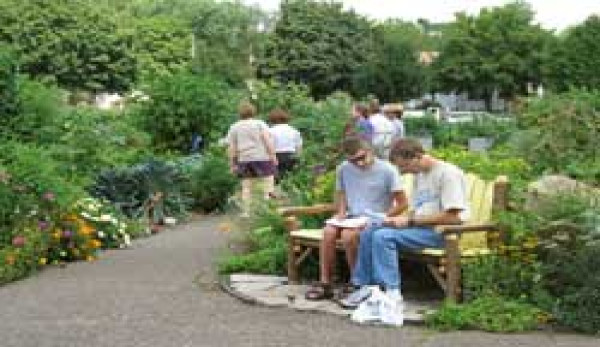 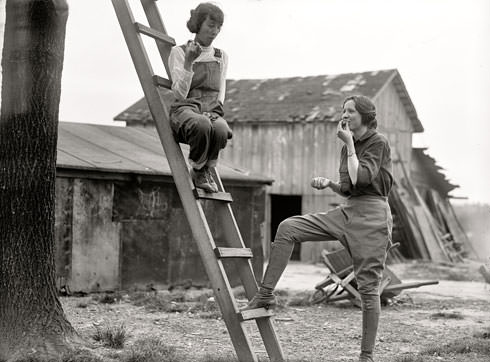 War gardeners, such as those shown above, helped start gardens just like the Dowling Victory Garden, which is still running strong today.

When Rose Pearson and her husband, Elof, started the Dowling Victory Garden in Minneapolis in 1943, they were responding to a nationwide war effort that included 20 million gardens that year. The goal was home food production as a way of supporting troops overseas and included many large community gardens such as Dowling, which stretches two city blocks. After the war, public needs and priorities shifted and most victory gardens were seeded to grass for parks and lawns. Today, Dowling is believed to be one of only two victory gardens still in use from that era. One reason for Dowling’s survival may be that the small yards in the surrounding neighborhoods left no alternative for serious gardeners. Another was the Pearsons’ interest in gardening, as they continued gardening there for more than 40 years. A third is that neither the neighboring Dowling School, for which the garden is named, nor the school district that leases the land to the gardeners has chosen to sell or otherwise use the land.

Just as any garden changes throughout the seasons, the Dowling Victory Garden has changed over the years. Interest in gardening waned through the 1950s and ’60s. The number of gardeners declined and plot sizes grew, averaging 50 by 120 feet at one point. The actual location also shifted over time from one side of a cross street to another and back. As interest in gardening began to grow again in the 1970s and ’80s, so did Dowling Community Garden.

While interest in gardening and growing your own food has exploded in recent years, places to do so are far less available than in 1943. Sunny, open space for gardening is often at a premium for residents of tree-lined streets and smaller lots, not to mention for apartment dwellers with no yard at all. In equally short supply are experienced gardeners who can answer questions about feeding the soil and tending the plants and who can share in the excitement of that first harvest of fresh produce.

Dowling Community Garden is a great place to garden, but to its nearly 300 members, the 179 plots are even more than a place to grow food. For Anna Piasecka, tending her community garden plot takes her back to her native Poland, where she helped her father garden. For Philip Lincoln Vaughan, Dowling is a school and laboratory full of mentors eager to share, guide and support his efforts to do more with less. For John Heine, it’s a place he can bring his daughter, Adeline, and build memories of gardening together as he once did with his father. And for Jeffrey Loesch, the gardens are a place to share seed from new and long-favored varieties, gardening ideas and recipes with fellow gardeners.

Dowling Community Garden is a catalyst, bringing together experienced and wannabe gardeners and the soil and other resources they need, from compost and seed to tools and information. This creates a sense of community that goes beyond the individual plot and collective garden borders. The garden’s success can be gauged by the waiting list for plots, which was cut off at 160 for the 2010 growing season, but even better by the enthusiasm of members like Vaughan.

“This is just the perfect place to be,” he says. “I’ve talked to people who waited three years to get a plot, and they say it was worth the wait.” 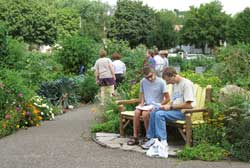 Vaughan credits sharing as one of the key benefits of being a community gardener. “I love having the chance to experiment with things I’ve learned from other people here,” he says. “I’ve never had a situation where I’ve asked for help and not received it.”

Sharing, by definition, is a two-way street. This past season, Vaughan tried extending his growing season by designing and fabricating mini-greenhouses from PVC pipe and row cover. Teaching others how to make them is payback for the heavy-duty tomato cage longtime gardener Charlie Bowler showed him how to make. It’s that “give and give back” approach that has taken him from frustrated to enthusiastic gardening.

“I tried gardening here about 15 years ago and felt like I wasn’t very good, so I left,” says Vaughan. “A few years ago, I read Carolyn Male’s 100 Heirloom Tomatoes for the American Garden [(Workman Publishing Company, 1999)]. It reinvigorated me, and the gardeners here welcomed me back. Since then, I’ve learned just by being here in the gardens.”

It isn’t just new gardeners who benefit from the sharing community. Bowler’s specialty is tomatoes. He saves seeds and shares them through Seed Savers Exchange as well as with fellow Dowling gardeners like Loesch.

“Charlie got the Provenzano tomato from a Canadian seed saver and gave seed to me,” says Loesch. “We pass things around a lot. That’s part of the community thing.”

One of the varieties Loesch has passed around over the past 10 years is an heirloom bean called Fontana. “A dear friend, whose family had brought them from Italy, gave them to me 30 years ago,” recalls Loesch. “I kept them in a glass jar for about 20 years before planting them when I started gardening here. Now others like Charlie are planting them and saving them.”

In 2010, more than 450 seed packets and tons of compost were shared among the gardeners. All gardeners have access to the Dowling Garden toolshed, complete with wheelbarrows, hoes, spades and rakes — in short, everything needed to start, maintain, harvest and clean up a garden plot.

Sharing isn’t just between the members. Garden plots are made available to classes at the nearby school, and four plots are devoted to flowers for the community to enjoy. Over the course of the summer, more than 4,000 pounds of fresh fruit, herbs and vegetables grown in a volunteer-tended plot and by individual gardeners were delivered to area food shelves.

Members also volunteered to maintain an heirloom flower, herb and vegetable garden in the yard of a historic home in nearby Minnehaha Falls Park. These isolated gardens are used to grow favorite varieties, such as the Provenzano, for seed saving and sharing.

Seed sharing and garden cleanup, along with free coffee, bagels and cream cheese, were front and center one sunny September Saturday. It was at the free-to-members seed-packet table that six-year member Piasecka delighted over the Manilovyi, a pink beefsteak-type tomato. “It means ‘raspberry colored’ in Russian,” she explained, adding that it was a favorite of her late father.