A couple gets into the chicken business quicker than they expected. 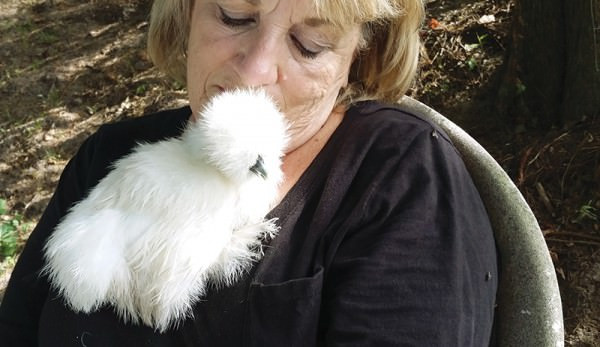 For several years, my wife, Jennifer—affectionately known around here as The Rancherette—wanted two or three little Silkie chickens. “They are sooo cute,” she said. “They are sooo fluffy. They look like baby rabbits. They would be great pets.”

You must understand: We already had 11 dogs on our property. They each have their own kennel space and receive the greatest of care. Most are retired Standard Poodle show dogs with a couple of rescue dogs and, lest I forget, an Airedale Terrier. I, the RancherWriterPoet, was not certain that chickens would be a good fit. So, quite obviously, my comment was always: “We don’t need any chickens. We have no place to keep them.”

“But we could build a coop,” she would say.

I ignored the conversation, hoping it would go away. I figured it was only a fad and would fade into obscurity. That was my mistake. I was unprepared for what The Rancherette did next.

I didn’t realize you could order chickens online. Hatcheries mail them to you, and they arrive at the post office in a little box with holes in the side: U.S. Priority Mail, two-day delivery. The postmaster called one morning at about 7 a.m. to tell us the birds had arrived and asked if we could come pick them up because they were cheeping and wanting to come home. I thought perhaps they could have given them flight plans and flown on their own, but they don’t know how to read or fly. So in the dead of winter, 28 chicks arrived from a hatchery, and the Rancherette picked them up and brought them home.

Prior to their arrival, The Rancherette had made a quick visit to the local farm-supply store to purchase a livestock water tub that could be used as a brooder. Being a novice at this, I helped in the best way I could. She picked up the feeders, waterers and wood chips for this endeavor. Of course, heat lamps and feed were necessary, as well. And so The Rancherette had her “two or three” Silkie chickens—or 28, as the case turned out—and we were in the chicken business.

Well, the baby chicks outgrew the brooder and needed a coop, so I began searching the internet for chicken-coop plans and began construction. As time went on, more birds began arriving. This called for a second coop, then another and still another. At this point, there are four coops, each being described as the “last” coop. But I’m not holding my breath. I am looking forward to building the “last” coop again! We still have at least another 3/4 acre: That’s plenty of room!

Our birds are much more sophisticated now than the first group several years ago. With multiple shows under our belt and numerous awards to match, we have expanded from a few Silkie chickens as pets into a show-bird hobby. We are also moving into a line of Cochin bantam birds with a pair appropriately named Cowboy and Cowgirl. After all, we do live in Texas.

We are also breeding our own birds now, and with each succeeding line, better-quality birds are being produced. We still have our favorite little pets: Miss Peggy, so named because she can only use one leg, and Smokey Bear, who has mostly recovered from wryneck. They know their names and usually come when called. These two hens reside in our “assisted-living facility” next door to Mick Jagger, the cock of the walk, and his hens, Fatty Girl and Bella.

Here on the Fuzzy Chicken Farm, we are excited about the future for both breeds. This is an exhilarating hobby and certainly keeps us on our toes. If you get the urge or opportunity to raise “two or three” Silkie chickens for pets, the internet has plenty of coop plans. You may also want to open an account at the local farm-supply store.

This article originally appeared in the November/December issue of Chickens.

Pete Robertson lives in Fruitvale, Texas, with his wife Jennifer. Follow Pete, aka The RancherWriterPoet, at www.rancherwriterpoet.com.