One Millimeter Can Make A Big Difference, So Make Sure You Have The Right Tool

Changing the blades on a lawn mower illustrates the importance of having the right tool for the job. A single millimeter can make all the difference. 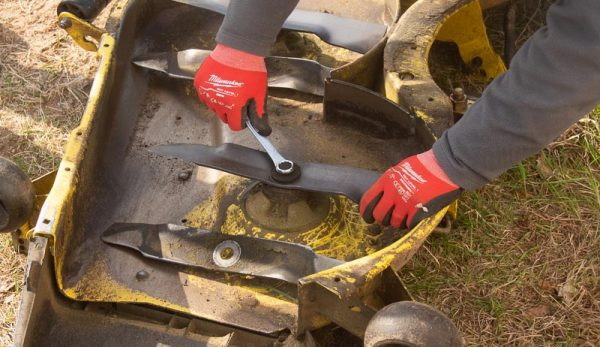 This year, as part of my spring machinery maintenance checklist, I decided to replace the lawn mower blades on my garden tractor. What should have been a straightforward task turned out to be a bit more complicated and time-consuming than I expected. But this was only because I failed to realize I didnâ€™t have the right tool on hand.

Removing the mower deck wasnâ€™t an issue. Following the instructions in the manual, I lowered the deck and removed the key from the engine. I released the mower drive belt and unhooked the deck from the tractor. Then I raised the hydraulic arms and pulled the deck out from under the tractor.

Simple as can be!

Read more: Follow this 13-step checklist to get your machines ready for spring.

Then I flipped over the mower deck and approached the bolts holding the blades in place. Suddenly, things began to get tricky.

The instruction manual was a bit vague on how to change the blades. It simply told me to remove the bolts, providing an exploded-view diagram to illustrate how the bolts held each blade in position with a washer.

There werenâ€™t any special instructions about the direction to turn the bolts. So I correctly assumed they needed be turned counterclockwise. But I was also left to guess the size of the bolts.

And this is where I went wrong.

Grabbing a ratchet and socket set, I tried a couple of sizes before determining the 3/4-inch socket was the only one that fit. I attempted to loosen one of the bolts, but I met incredible resistance.

The bolt wouldnâ€™t begin to budge. When I applied more strength, the socket repeatedly slipped loose off the bolt.

Assuming the bolts were rusty, I grabbed a rust removal spray and applied it to all three bolts. After letting the spray work for a little while, I resumed my efforts to undo the bolts.

Unfortunately, my luck was no better. I tried a crescent wrench. But I couldnâ€™t get it tight enough around the stubborn boltsâ€”it kept slipping, to the point where I was starting to put dents in the crescent wrench.

Clearly, the bolts were installed tightly. And clearly, I wasnâ€™t making any progress in removing them.

Read more: The right tool for the job can make all the difference.

I seriously considered giving up and taking the deck to a professional, but first, I called on my father to see if he had any ideas. My father has an even larger collection of tools than I do, so he brought over a toolbox stuffed full of sockets and wrenches.

Together, we tackled the bolts one more time.

My father tried a 3/4-inch socket and likewise found that it slipped when he applied too much pressure. But whereas I had gotten stumped at this point, my father realized we were working with metric bolts.

Rooting through his toolbox, he came up with an 18mm wrench. It was slightly smaller than the 3/4-inch socket, which measures 19.05mm.

The 18mm wrench was a perfect fit. It didnâ€™t slip at all. When my father tapped on the end of the wrench with a hammer, he was able to loosen all the bolts.

From that point on, the job was easy. We replaced all three blades and reinstalled the bolts with the 18mm wrench. We followed the instruction manual to reattach the deck to the tractor, and congratulated ourselves on a job well done.

My garden tractor is now ready for a busy spring of mowing with fresh, sharp blades.

The takeaway? Make sure you have the right tool for any job, even if itâ€™s as simple as making sure you using metric wrenches for metric bolts. As this story vividly illustrates, a single millimeter can make all the difference between failure and success.