The Opossum: Awe-Inspiring But Often Underappreciated

The opossum is a marsupial with many fascinating attributes; it's also a superhero when it comes to cleaning up around your property. 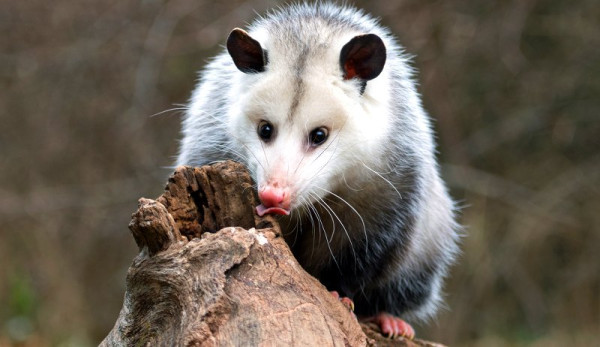 Didelphis virginianus, the Virginia opossum, commonly called â€śpossum,” brings a unique set of animal superpowers to North America. This animal that’s native to southeastern U.S. and Central America mirrors our civilizationâ€™s patterns with its presence. Clustered in areas of dense population that unintentionally provide a year-round food supply, opossums are part of everyday life for many. However, just about every aspect of this animal is unusual and misunderstood.

Opossum Is A Super Omnivore

In fact, they eat many, many ticks. Researchers estimate that one opossum could eat between 4,000 and 5,000 ticks per season. The chances of survival for the blood-sucking, disease-carrying parasites that inhabit an opossumâ€™s coat are only about 3.5 percent, as opposed to a survival rate of 50 percent for ticks that get attached to a white-footed mouse.

Reproductive systems of opossums and other marsupials are fascinating. The males have forked penises, which match nicely with the femalesâ€™ internal organs, which divide in two,Â as well. Even the sperm swim in pairs for part of their journey.

Baby opossums have the shortest gestation period of any mammal in North America, developing only 12 days before birth, and they are only about the size of a dime when born. They must blindly crawl along the furry terrain of their motherâ€™s body, seeking a warm teat. Being marsupials means the young are warmly protected in the pouch on the motherâ€™s abdomen, where they stay and nurse for around 100 days.

The Opossum Is Super Clean

Opossums remove more disease and dangers from your garden than they bring in. â€śFastidiousâ€ť best describes opossum cleanliness; part of the reason ticks and other parasites donâ€™t survive is because of thorough grooming habits. They not only evade diseases, such as rabies, because they have an unusually low body temperature, but they also dine on a variety of decomposing animals; cleaning up carcasses is one of their specialties. Whatâ€™s more, opossums are somehow immune to stings and venom from bees, scorpions and snakes, so those potential threats become opossum food, as well.

The Opossum Has Super Appendages

Opossums use their prehensile tails like monkeys doâ€”to hang and provide extra balanceâ€”but also like elephants use their trunksâ€”to carry things such as grass to line their dens. They also have a digit that’s like our thumbs on their hind feet called a hallux, which enables agile climbing and grasping.

Opossums Can Emit A Super Stink

Opossums do not fight to protect a den, but they might be somewhat territorial. Because they travel with their young, they are mobile and can live anywhereâ€”in tree cavities, underground dens, or nooks and crannies of buildings. To keep their boundaries set, opossums communicate to other opossums with signature scents that identify their landmarks.

As you might know, they pretend to be dead when startled, but this is a last resort. Like most defensive animals, they might start by hissing, baring their grand display of teeth or possibly even biting. They also are likely to run away, retreating submissively. If they get scared enough, they will go into shock, seize up and excrete a greenish mucus that smells like death. Not to be confused with pretending to be dead, this immobility is a comatose state that can last several hours. Unconscious opossums are extremely vulnerable, so itâ€™s not a behavior they display unless they have no other choice.

WARNING: Be absolutely certain that an opossum is dead before you bury it on your property or move it to an area with predators. Also, be kind enough to swerve if you see what looks like a dead opossum in the road, because it might just be stunned.

The Species Has Its Weaknesses

Despite the amazing adaptations that have developed since the time of the dinosaurs (it is estimated that the opossum has been around for 70 million years), the species has its challenges navigating human civilizations. Dining on roadkill, one of its many food sources, shortens an opossum’s lifespan considerably. So does the cold. The opossumâ€™s body is not able to put on layers of fat to insulate it through the winter, so it has to huddle in its den (or your barn) to survive any temperatures below 19 degrees. The rural opossum has a harder time of it, while its urban cousins take advantage of the heat island effect of cities.

Opossums are slow-moving, small-brained, low-to-the-ground nocturnal animals. While those attributes can be advantages in not getting noticed, opossums are relatively susceptible to predators, such as dogs, cars, hawks and coyotes.

A mother keeping track of her weaned young communicates through clicking sounds, while the young respond with sneezing sounds. In an area with great sound interference, it would be easy to lose touch with each other.

Males expand their range during breeding season, and females extend their foraging times into daylight hours when they are burdened with carrying their growing young. These times of exposure and risk-taking shorten their lives, and humans who work in wildlife rehabilitation sometimes rescue the young from pouches of dead female opossums found on roads.

All in all, opossum life spans reflect the challenges of their world, lasting usually only one year. If you share your farm or garden with opossums, make sure your poultry is well-secured, and then leave these little cleaner-uppers to their night shifts.