This colorful kale is striking when mixed into a garden. 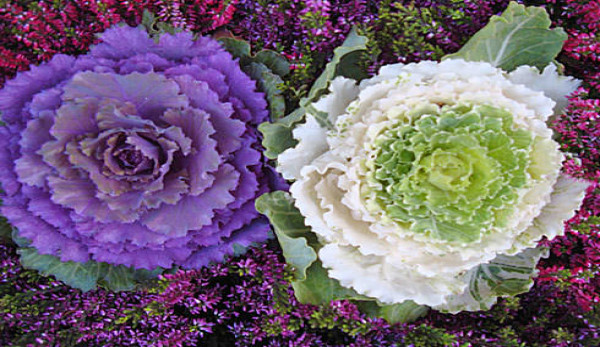 When I managed the grounds department for a Las Vegas hotel, we used to plant a lot of ornamental kale and cabbage in the flowerbeds. I remember that weâ€™d frequently have trouble when homeless people would rip up a few of the plants and try to eat them. Unfortunately, these colorful cabbage cousins arenâ€™t nearly as tasty as a nice, regular head of cabbage. Iâ€™ve tried to eat ornamental kale, and I think only the center floret is fairly edible if steamed and eaten with vinegar or horseradish, but the older, outer leaves are just too tough.

The big trick with ornamental kale is to plant it early and give it a lot of space and fertilizer. Itâ€™s a cool-weather crop, so planting early in climates, such as Californiaâ€™s, usually means planting in late summer or very early fall. In Minnesota, planting early probably means seedlings on the refrigerator in February. In any case, weekly feedings with a liquid fertilizer containing nitrogen will make the plants grow toward their maximum potential.

There is actually some news in the world of ornamental kale, and that is the relatively recent availability of the small-headed but long-stemmed varieties called leaf peonies. Leaf peonies are captivating new versions of this old-fashioned flower species.

Ornamental kale is a good crop for small farmers if they use a large container for cultivation. Small pots tend to stunt these plants, so the way to grow the impressively large specimens that fetch top dollar on the market is to use a 1-gallon bucket or larger containers. A mature ornamental kale plant at 6 months old can be as large as 2 feet wide if grown in a 5-gallon or larger container. I have seen growers field grow some monster specimens that were then being dug and root wrapped for bare-root sale to customers.

Just for the record, the ornamental cabbages are those with the slightly wavy leaves. The really crinkled leaves are on kale plants. Kale is planted more because they are a bit more striking. Many people plant in patterns and use the two leaf types and the two basic color types to make disparate plots and panels of contrasting plants in the flowerbeds. Some red-leaved cabbage planted in a circle surrounding a group of white marked kale plants is a classic layout style. Mixing in other flowering plants gives even greater dazzle power.

It is true that the cold weather brings out the colors in the individual plants. This means that what home growers would ideally do is buy very young, green specimens at their local nursery, and then plant those as yet un-colorful plants in their flowerbed. Then, start feeding them like crazy, growing the mostly gray-green plants to the greatest size possible before the cold weather arrives and essentially stops any expansive new growth. The big, green adolescents will then evolve into becoming the fully colored, mature plants.