This native forest-grown plant has a surprisingly tangy flavor and can be used like kava kava to help ease anxiety. 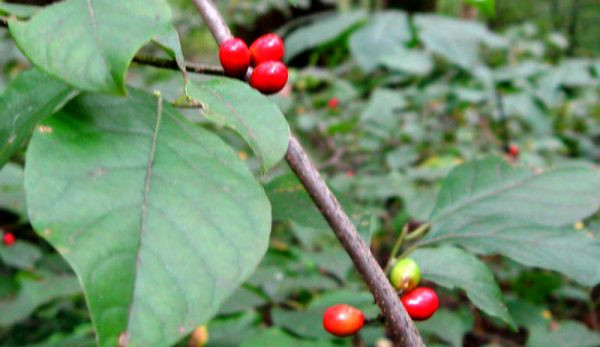 Last weekend, I attended an important gathering at United Plant Savers here in Ohio. We had a day of education, medicine walks and communion among plant people. Sadly, our teeth chattered at this outdoor event, as fall has hit hard here in the Midwest, but nonetheless, there was much to learn.

I went with the goal of picking up some information on a plant I have been increasingly drawn lately. As is often the case for me, even though I didnâ€™t share that goal with anyone I met, it was all anyone seemed to want to talk about. So, as I had intended, I am sitting down to share with you about spicebush (Lindera benzoin).

My first experience with spicebush was in college. My professor, Dr. Johnson, was an energetic man who seemed to float a few inches above the ground as he sprinted through the forest. While hiking behind him during taxonomy class,I often had to gauge the risk of looking up to see where he was pointing, sure that I would trip over exposed tree roots and stones. One day, in a sunny portion of a wooded area in southern Ohio, he showed us the spicebush. He broke off a leaf and passed it around for us to smell. I will never forget the lemony scent that surprised me. I had not expected a green, leathery leaf in my own backyard could contain such spice.

Seeking Out Spicebush
Spicebush grows under cover of tall trees, but it seems to like spaces in the forest where you can see the glow of the sun through the canopy. It fills these quiet spaces as an indicator of the health of the soil. Beneath its shade you will find many small and mighty medicinal plants, such as ginseng and goldenseal.

Spicebush blooms in early spring with a small yellow bloom similar to the fall color of the leaves. In late summer you may find the spicebush swallowtail caterpillar walking boldly along a stem. I got to see one these fascinating creatures this year at Scioto Gardens, a plant nursery near my home, and its visitation alone is enough to induce me to grow this shrub. Heading into winter, the spicebush is bedecked with red berries until the birds take off with them.

Medicinal Uses for Spicebush
Various Native American people used the twigs and berries of spicebush medicinally. The berries, when dried, are reminiscent of allspice. The twigs have been used for their sweat inducing, aka diaphoretic, abilities and to prevent the suffering of cold and flu season.

My favorite tidbit picked up last week had to do with this plantâ€™s abilities in the nervous system. Paul Strauss, founder of Equinox Botanicals and member of the UPS advisory board, took a number of folks on a walk through the preserve. When he stopped to talk about spicebush he shared that it was traditionally used like kava kava. How exciting to know that we donâ€™t need to go to the tropics to find a plant with the ability to calm anxiety and open conversation in difficult situations! I know quite a lot of people who should have a spicebush in their backyardâ€”but theyâ€™ll have to refrain from nibbling it down to the ground when they have a particularly stressful week.