A sad thing happened to one of Mom’s friends this week. Her sweet, orphan bottle lamb was attacked by her neighbor’s dogs and killed. That’s a shepherd’s worst nightmare. And dogs can kill other livestock, too. 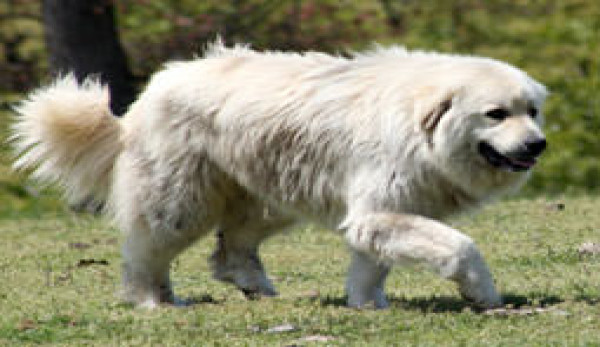 A sad thing happened to one of Mom’s friends this week. Her sweet, orphan bottle lamb was attacked by her neighbor’s dogs and killed. That’s a shepherd’s worst nightmare. And dogs can kill other livestock, too.

According to USDA figures, 39 percent of all sheep and lambs and 32.5 percent of goats and kids that died in 2009 were killed by predators. Farmers and ranchers lose almost $100 million annually due to livestock kills, according to a Hobby Farms article by Carol Ekarius. It’s important to protect us not only from big, scary killers like bears and mountain lions but things like coyotes and dogs, too. That’s where our friend Feyza comes in.

Feyza is a livestock guardian dog. (Some folks call them LGDs.) These are big, strong breeds developed long ago in Europe and Central Asia, specifically to guard groups of goats and sheep. They lack the prey drive that makes most dogs chase small livestock. Instead, they bond with the animals they live with and protect. Humans developed them in colors to match the sheep or goats with whom they lived, so many livestock guardian dogs like Feyza are white or tan.

Feyza’s father was an Anatolian Shepherd, a big, short-haired breed developed in Turkey thousands of years ago. Her mother was Great Pyrenees, an equally ancient long-haired breed from France. There are lots of other guardian breeds too, like Kangal and Akbash dogs from Turkey, Polish Tatra Sheepdogs from Poland, Kuvasz and Komondors from Hungary, Karakachans from Bulgaria, Estrela Mountain Dogs from Portugal, Maremma Sheepdogs from Italy, Caucasian Ovtcharkas from Russia, and Tibetan Mastiffs from Central Asia.

Feyza came to live with us when she was only 8 weeks old. She was so sweet and cute; she looked like a fuzzy little bear. Mom wanted to keep Feyza in the house, but in order to bond with us sheep and goats, she had to come live with us right away.

Mom and Dad fenced off part of the big goat shelter for her using pipe gates. That way she could stay in her area or go out among the goats whenever she pleased. In just a few days, she started sleeping cuddled up against a mama Boer goat named K’ehlyr. She and K’ehlyr are like Uzzi and me: best friends.

Now Feyza is 7 years old. During the day, she goes out in the pasture with our sheep and goats. At night she stays in the Boer goats’ sleeping paddock, but she’s big and strong, so she can jump over fences if anything bothers the rest of us sheep and goats.

Uzzi and I think every sheep, goat or any other vulnerable small animal should have a friend like Feyza to protect them.