Outfit Your Coop With An Automatic Door

By installing an automatic door on your coop, you don't have to be home when it's time to put the chickens to bed. 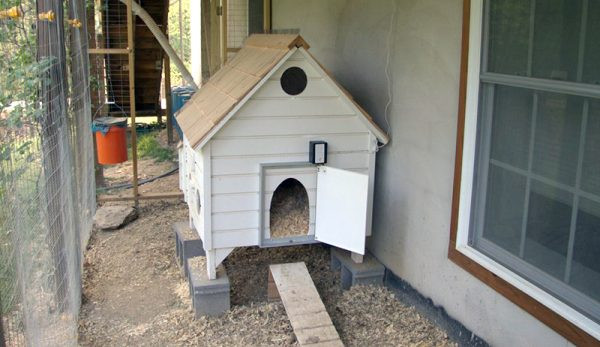 One feature of my chicken coops loomed over my goal of enjoying a two-week vacation without coming home to dead chickens: pop doors, which are the small doors on a coop that allow hens to go out in the morning and come back in at dusk. They should be closed after the hens go inside at night to provide one more layer of security against nighttime predators, such as raccoons, opossums, weasels and coyotes. It also needs to be opened again for the chickens in the morning, so they can free-range and get some exercise.

The simplest pop door I‚Äôve seen is one with a couple of hinges on the high end of the gangplank near the bottom of the opening and a hook at the bottom end. After the girls go in for the evening, you just swing the gangplank up to cover the door opening and secure it with the hook. In the morning, you head out and drop the gangplank/pop door open. It‚Äôs a good design. However, that‚Äôs still a twice-a-day chore that‚Äôs not compatible with taking a vacation or even sleeping in. My wife and I both firmly believe in going to bed early and rising late: Neither of us is inclined to get up at daybreak for any reason‚Äînot even for our chickens!

To resolve this quandary, we considered three ways to keep us in bed while allowing our early birds to get their worms.

In the old days, when the entire backyard served as the chicken pen, this twice-daily door ritual was absolutely necessary to keep predators out of the coop. But for modern chicken-keepers, if you‚Äôre confident that your pen fencing is secure against predators, you could actually forgo an operating pop door. It is, after all, just a second layer of security if your pen is predatorproof. An opening big enough for the hens to come and go freely would only need to be about 8-by-12 inches.

This seems ideal to me, as there is no electricity to fail and few moving parts to break. Andrew Wells, a chicken keeper in England, appears to have figured this option out. When all of his chickens have climbed onto the roost, their combined weight shifts the roosting bar so that cables and pulleys lower the pop door. When they hop off the roost in the morning, it shifts again and opens the pop door. Counter-balancing milk jugs, partially full of soil, are adjustable to allow for changes in chicken population and weight. It‚Äôs on my list to put something like this together. A caveat: If a chicken dies during the night, the door will still open, but they won‚Äôt have enough weight to close it until you adjust the device.

This is the route my wife and I chose. There are several designs on the market these days, at various price points. We were more than happy to spend the money for it if it meant we could wake up listening to the happy clucking of hens in their pen while we were still in bed. If you go this route, most of the doors on the market come with decent installation instructions and videos.

Here are some things you should keep in mind when choosing an automatic door for your coop.

If you already have electric power going to your coop, you may want to forgo the extra expense and time of installing a solar panel to run your automatic door. On the other hand, if it would be troublesome to run electricity to your coop, then solar may be just what you want: A solar panel is immune to power outages, after all. Or, better yet, just pick up a battery-powered door opener.

We didn‚Äôt have electricity running to our coop, but it was next to the brick wall of our garage, which does have power, so I used a masonry bit and hammer drill‚Äîboth can be rented if you don‚Äôt own them‚Äîto drill a hole through the wall and run the electric cord from the automatic door into the garage, where I plugged it into an outlet where the timer was not exposed to dust and feathers.

You may want to run an extension cord from your house to the coop, but with that, you‚Äôre taking a chance on an electrical short during rainy weather, so make sure the cord is plugged into a ground fault circuit interrupter outlet. If there‚Äôs a short in the cord, the outlet will turn off rather than setting a fire. An electrician can easily switch out an old outlet for a GFCI.

Or, if you don’t want to mess with wires or solar, you can opt for a battery-powered automatic door. In recent years, battery-powered units have become way more efficient and, as a result, more common. Brinsea’s ChickSafe hen house door openers, for example, run on four AA batteries, and the manufacturer claims one set of batteries will last at least six months.

Should you get an automatic door that opens on hinges, like most doors, or one that is raised up and down by strong twine on a spool, like a window shade?

We didn‚Äôt look at many reviews of coop doors, thinking that they couldn‚Äôt be that different, and we picked one that had a good installation video on their website. It‚Äôs the kind that‚Äôs pulled up by a roll of line, and it has worked fine for us for years.

Be warned, though: both styles share a potential problem. If bedding gets in the doorway, the door won‚Äôt close all the way. If a raccoon does get through the fencing, it could grab the exposed edge of the door and open it. To preclude that, we set a foot-long 1-by-4 on the floor, inside the doorway as a buffer to keep the bedding from blocking the opening.

Almost all automatic doors depend on a timer. For hardwired models, you can use a common timer that turns living room lamps on and off while you‚Äôre away. For many years, keepers have plugged their doors’ cords into the timer, then plugged the timers into outlets.

Of course, there are plenty of new items on the market that do it all for you. Newer models have built-in timers on the units themselves. Now that’s progress.

If your door is hardwired and the electricity goes out, the door will stay in whatever position it‚Äôs in‚Äîopen or closed. If the power goes out overnight, your chickens will stay sequestered in the coop until you open the pop door or keeper door or are able to reset the timer when the power returns.

That’s why battery-powered models are so handy‚Äîthey work even when the lines are down. And plenty of door openers these days come with a light sensor, too. With this piece of technology at play, the door goes up when the sun comes up. And the door shuts itself when dusk settles in and your chickens are roosting happily in the coop.

If you’ve got a battery-powered door opener with a light sensor and backup timer, you’re set. You can go ahead and book that vacation you’ve dreamed of.

After you install an automatic coop door, depending on the route you chose, there may be some visible wires inside the coop that would be tempting for the chickens to peck at, which was the case with ours.

To be on the safe side, I screwed a scrap piece of plywood over the wires in a way that wouldn‚Äôt interfere with the operation of the door. Because I used screws, I can always remove the plywood for repairs or replacement.

But thankfully, I don‚Äôt have to worry about the chickens electrocuting themselves if they mistake a wire for a worm.