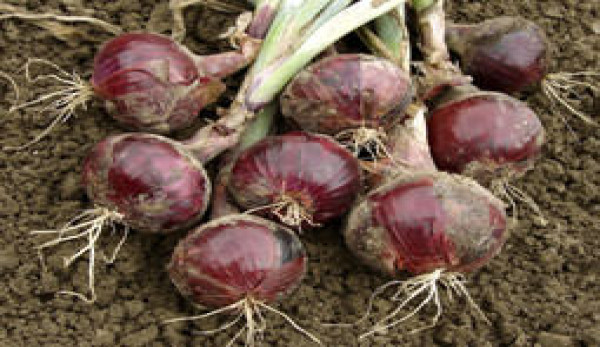 Onions are one of New York‚Äôs most valuable vegetable crops, but growers face a host of production challenges: Bacterial rot cuts deep into profits, and the fragile muck soil that most¬Ýonions are grown in is susceptible to as much as 1 foot of erosion every 10 years.

Fortunately, the toolbox of solutions to these onion problems is expanding fast, thanks to promising research projects taking place at the Cornell University Extension. There, vegetable specialist Christine Hoepting is using a series of Sustainable Agriculture Research and Education grants to investigate new onion-growing approaches, from conservation tillage to mulches to planting techniques to soil fertility.

In one study, Hoepting found that reducing plant spacing by half (to 4 inches) could reduce yield loss to bacterial rot by 63 percent beyond growers‚Äô standards. This could boost net profit by up to $258 per 100-foot bed for fresh-market onions. Using alternatives to black plastic mulch‚Äîwhich absorbs sunlight and can create favorable, warm conditions for bacteria‚Äîyielded similarly positive results.

“A lot of growers became aware of how they can manipulate¬Ýmulches and plant spacing, so they‚Äôre experimenting on their own now,‚Äù Hoepting says.

One of those growers is Matt Mortellaro, who raises 200 acres of onions for retail distribution on his family farm in Elba, N.Y.

“We‚Äôve increased densities of our transplanted onions,‚Äù Mortellaro says. “It sometimes results in smaller bulb sizes, which can earn less on the market, but the increased quality more than makes up for it.‚Äù

Another unexpected finding helped Hoepting leverage a $10,000 SARE grant into a $220,000 grant from the Northeastern Integrated Pest Management Center. After noticing that onions grown in a low-lying area of one test plot suffered disproportionately high damage, she speculated that nitrogen buildup was feeding soil bacteria. She‚Äôs now studying the relationship between nutrient levels and bacteria incidence.

Mortellaro, like most of New York‚Äôs larger-scale onion growers, plants most of his crop in muck soil, which is rich in organic matter but very friable because it was created from drained wetlands. Wind damage poses a serious problem under conventional tillage practices, especially during planting season.

“I‚Äôve seen 4-foot drifts of muck. It reminds me of snow,‚Äù Hoepting says. “Onions can be decapitated or pulled right out of the ground by strong winds when they‚Äôre young.‚Äù

While many farmers plant protective windbreaks of barley between onion rows, the young onions are vulnerable to wind damage in the spring until the barley has grown tall enough to offer protection. Hoepting compared minimum-tillage systems that left the residue of fall-planted oat and wheat cover crops on the ground to a conventional system that plowed the residue under. She found the residue left from minimum tillage protected both the soil and the onions, effectively preventing erosion and improving net profit by 9 percent compared to the conventional system.

“It‚Äôs right only for certain acreage,‚Äù Mortellaro says, referring to a farm‚Äôs most wind-exposed fields, but he plans to take advantage of cover-crop residue on 30 acres of his land. “It‚Äôs working to my economic benefit enough that I‚Äôm going to continue doing it,‚Äù he says.