Enjoy your dahlias for another growing season with this winter storage method. 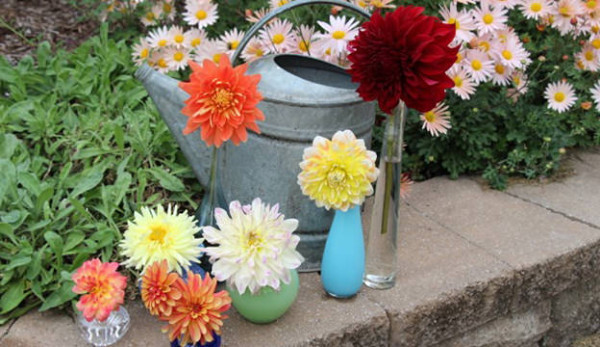 Dahlias are among my favorite summer bloomsâ€”the stunning diversity of flower shapes and colors never fails to amaze me. Every year, I grow more than a dozen different dahlia varieties, and each fall, I dig up the plants and overwinter them in the garage.

Officially speaking, the fleshy underground roots of the dahlia are not true bulbs, but rather tuberous roots. Regardless of their proper botanical category, dahlias aren’t winter-hardy here in western Pennsylvania, and because of that, the roots must be pulled out of the garden each fall and put in storage until theyâ€™re ready to be replanted the following spring.

Like many projects in the garden, there are a dozen different ways to complete this task. Some gardeners allow the roots to sit in the ground for a few weeks after the tops have been subjected to a few hard frosts. This encourages the tubers to sprout eyes, making it easier to separate them before packing the tubers up for the winter. However, I find that splitting the tubers before packing them up makes them more prone to developing rot in storage. Instead, I use a different technique to dig and store my dahlias for the winter.

I choose a day when the soil is decently dry and the weather is sunny, and I lift the tubers by using a pitchfork to gently pry them out of the soil. I wait until after the tops have been frosted to complete this task. Once the tubers are out of the ground, I cut off the stems and use my hands to gently brush off the excess soil. The tubers are then spread out on a piece of flattened cardboard or old window screens in the garage. I label them well by writing the variety name right on the tuber with a permanent marker.

The tubers are left to sit for two days or three days before I use a soft paint brush to remove any remaining soil. Then, I pack the roots in layers of very slightly damp peat moss or vermiculite in an unwaxed cardboard box. It’s important to make sure the tubers do not touch each other while in storage to prevent any rot from spreading.

I close the box, but don’t tape it shut, and store it in a cool place like the basement or the garage. If you want, you can check the tubers for signs of rot every month or two during the winter and remove any that are soft or smelly. This is a step I often forget, but I’ve never had a problem with the roots rotting in storage.

My dahlias will be ready to be planted back outdoors next spring after the danger of frost has passed. At that time, dividing them will be easy, as each viable tuber division will have sprouted or swollen eyes that look much like the eyes of a potato. I use a clean, sharp knife to cut the tubers apart, being sure each section has at least two viable eyes. The tubers are planted with the eyes an inch or two beneath the soil surface.