Cutting-Edge Crops: How to Grow Oyster Mushrooms for Profit

With the right production system, a farmer can grow many hundreds of pounds of oyster mushrooms per year in a relatively small indoor space. Here's how it works. 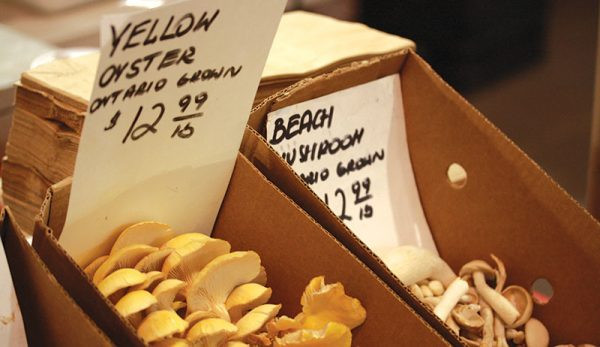 Think of oyster mushrooms as the first step for farmers who want to cultivate fungi for fun and profit. Prices for oysters (Pleurotus ostreatus) remain around $10 to $12 a pound at farmers markets because of interest from chefs and home cooks.

In nature, oyster mushrooms grow on dead and dying trees in the woods, so you could spend a lot of time searching to find enough to sell. But with the right production system, a farmer could grow as much as a ton of oyster mushrooms every year in a few hundred square feet of indoor space: That could be as much as $20,000 a year at retail prices once everything is running smoothly.

You needn‚Äôt fill your space with dead trees to grow them either. Oysters are easy to grow on almost any cheap, available plant waste: peanut hulls, cottonseed hulls, sawdust and wheat straw. Mycologist Tradd Cotter, author of Organic Mushroom Farming and Mycoremediation (2014), even grows them on spent coffee grounds, cardboard and tattered cotton blue jeans, on his Mushroom Mountain farm in Easley, South Carolina.

I learned the ease of growing oysters by filling a 5-gallon bucket with spent coffee grounds in our kitchen. By sprinkling a bit of mushroom spawn‚Äîyou can start your own or buy the spawn online‚Äîas I added coffee grounds, I created a miniature garden of growing mushrooms. I merely left the bucket lid ajar for ventilation and let a little light in. It took less than a month to harvest a couple of pounds of mushrooms without leaving the house or doing anything that resembled work.

Making coffee essentially pasteurizes the grounds with wet heat‚Äîan important first step in mushroom cultivation. When organic matter is wet, it becomes an attractive food source for any fungi spores floating in the air.

By using wet heat to pasteurize your mushroom‚Äôs food source‚Äîalso called substrate‚Äîyou give your chosen mushroom spawn a head start in the race to colonize your coffee grounds or other materials.

To grow a marketable quantity of oyster mushrooms, you can use more readily available materials either from your own farm or from local agricultural processors. A commonly used substrate is wheat straw, and you might want to begin your education with that. Even if you don‚Äôt grow grains, you can easily buy bales of straw. Be sure to shred the straw into shorter bits. A string trimmer can do the job if you drop some straw into a big garbage can and insert the trimmer like a kitchen mixer whipping up some batter.

‚ÄúOyster mushrooms are some of the fastest-fruiting fungi on the planet, making them perfect for educational projects and disaster relief,‚Äù Tradd writes in his ‚Äôshroom book.

The key things when growing oysters are:

You can pasteurize your substrate with several low-tech methods described by Tradd in his book, such as using solar heat or even a solution of wood ash that can pasteurize at room temperature. Tradd prefers pasteurizing a batch of wheat straw by dunking it into 55-gallon, food-grade metal drums with tight-fitting lids. He stands his drums on bricks or cinderblocks to make room for a propane burner and then heats the drums to about 170 degrees F for one to two hours. That‚Äôs enough time to pasteurize the straw.

The wet straw is heavy, so Tradd uses an electric hoist and a simple aluminum cage to raise and lower each batch of straw in and out of the drum. A winch on a vehicle or a set of pulleys‚Äîand a set of muscles‚Äîwill work in place of an electric hoist.

After adequate heating, the straw is dumped out onto a stainless steel table wiped down with rubbing alcohol to eliminate weed fungi.

Once the substrate has cooled enough to handle, Tradd puts it in his containers, which might be long plastic bags, poly tubing, PVC pipes or even repurposed nursery pots soaked in a 1:10 solution of bleach to water to eliminate weed fungi. When two-thirds full of substrate, the nursery pots are easy to stack. The drainage holes make perfect escape hatches for the mature stalks of oyster mushrooms.

Some species can be grown outdoors on fresh logs and stumps with assistance from overhead sprinklers during dry spells. Find best results growing them in enclosed structures that let you manage humidity and temperature. This is especially true for oyster mushrooms from tropical regions; these include pink, golden and Florida oysters. But even temperate varieties such as king, tree, blue and phoenix produce more under controlled conditions. Some farmers even adjust the oxygen and carbon dioxide levels indoors to a small degree to promote growth and fruiting.

The time from inoculation of the substrate with spawn to harvest might be three to five weeks. Later flushes should arrive several weeks apart. Harvest singles or clusters by hand, twisting them to remove the base of the stalk. Trim the end to keep your harvest clean; you can also use the trimmed ends to start another batch of spawn. Arrange the mushrooms facing the same way in boxes to save space, reduce damage and to make them look more appealing.

You can store them in a refrigerator for one to two weeks. Given their flavor and the demands of the market, I bet they won‚Äôt stick around that long.