Overharvesting wild beds and water pollution have created an incentive for farming oysters. Here's what you need to know to get started. 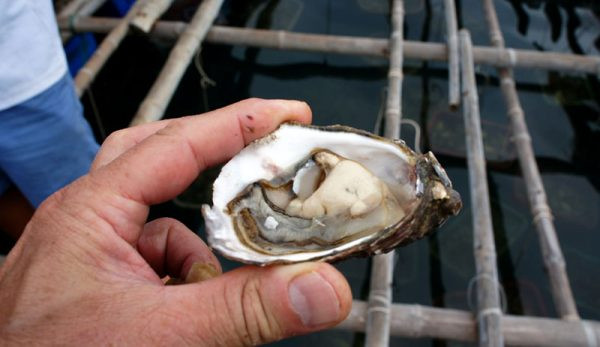 Eating oysters on the half shell out with friends, Iâ€™ve noticed a few changes over the years. And not just in my friends. It seems that oyster shells have gotten deeper and the oysters, fatter and tastier.

Most curious is that oyster bars now offer oysters in summer. To me, oysters are out of season and not as tasty then. Most people know the rule that oysters are best in months that have an â€śrâ€ť in them, meaning that one avoids oysters in the spring and summer months of May, June, July and August. But that doesnâ€™t seem to be the case these days. Whatâ€™s going on?

But the depletion of oyster beds from overharvesting and disease, as well as pollution from cities, industries and intensive livestock operations, has created an incentive for farming these sea creatures. The research and extension services of many statesâ€™ agricultural universities have risen to the challenge.

Researchers have bred oysters that are sterile and resist disease. Because they donâ€™t reproduce, oysters are still fat and tasty in the summer months, which extends the season for farmers. Without spending energy on producing the next generationâ€”extension oyster hatcheries take care of thatâ€”these oysters come to maturity in two years rather than the three it takes wild oysters to reach harvest size of 3 inches long. That accelerates profitability for farmers.

With oyster farming, you donâ€™t need much land, and you neednâ€™t feed your crop. Oysters are a more resilient shellfish than clams or scallops for farming.

If you have access to clean salt water that has historically supported Atlantic oysters (Crassostrea virginica) or West Coast oysters (Ostrea sp.), you can probably get a lease for harvest rights below the low tide line and a permit for oyster farming. Check with your local ag extension office or wildlife agency. Just an acre or less of shallow water is enough to start an oyster farm. Because oysters filter the water for their food, youâ€™re helping the environment while spending nothing on feed. Contrast this with the 5 pounds of fish that it takes to raise 1 pound of farmed salmon.

Many coastal ag extension offices offer one-day workshops on farming oysters. Ag agents also visit sites for specific technical feedback on what you need to succeed. They can often help you with a business plan, too. In some states, you canâ€™t sell directly to the public, so learn about local wholesalers and restaurants and ask them what they want in terms of quantity, quality, seasonality and price.

If you have access to a dock, you can start increasing your aquatic mollusk knowledge inexpensively by working with your local ag extension and doing whatâ€™s called oyster gardening. Many extension oyster hatcheries give away button-size baby oysters to people who commit to growing them for a year so they can repopulate depleted oyster beds with juvenile oysters. Some hatcheries want all their oysters back, so you might not get to eat them (darn!), but you do get a low-cost education in oyster management before taking the next step.

Another option: Look into a sustainable franchise model called GreenWave. It trains and assists farmers in implementing a mixed farming model that adds seaweed, sea vegetables, mussels and other marine crops to an oyster operation to better deal with fluctuations in the market and the weather.

A pickup truck, a small work boat and a dock will get your farm started. Oysters can eat only while they are under the water, but thatâ€™s also the time when their shells and containers can get fouled by algae, seaweed, mussels, barnacles and predators. A setup allowing the oysters to be above water so they can dry out kills these fouling organisms and makes for a cleaner and more profitable shell at harvest time.

Many oyster farmers grow their oysters with whatâ€™s called an off-bottom system. In it, oysters are suspended near the surface of the water in baskets, bags, trays or cages called oyster condos, racks, Taylor floats or adjustable long-line systems. These devices let the oyster be held above the water part of the time.

Some of these containers have floats allowing the racks to be flipped over, while others are suspended from piers like soggy sheets on a clothesline. When the tide goes out, the suspended bags of oysters can dry out. Floating cages can be flipped weekly so they can dry out and kill the fouling organisms. Flipping also makes for a deeper shell and a fatter oyster.

How Much to Get Started?

The cost estimates of most extension websites are based on starting with an acre or more of oysters and a couple of thousand or more bags or cages. That could cost from $60,000 to $200,000 depending on a number of variables.

The University of Maine Cooperative Extension recommends starting small with just 25 oyster bags or cages. Counting equipment, baby oysters and permitting, you could get started for less than $5,000 if you already have a truck, boat and dock. Add another round of bags or cages and oysters each year, and you could be making a profit in three years. At that scale, you might manage without a helper, but generally oyster farm employees make $15 to $25 an hour depending on experience.

If youâ€™re familiar with the notion of terroir, in which soils and climate determine the taste of vegetables and fruits, then youâ€™ll understand the notion of merroir, in which the character of seas determines the flavors of oysters. Generally, the saltier the sea, the saltier the oyster. Oysters grown near large freshwater rivers are less salty.

The more time an oyster spends out of the water, the sweeter it tastes. The best tasting oystersâ€”for sweetness and saltinessâ€”are from my home region of the South Carolina Low Country. Tides there run 6 feet, so oysters spend a lot of time out of the water. The Sea Islands that were my youthful stomping grounds are far from the smallish rivers that feed the salt marshes there, so their salinity is high. In northern beds, oysters spend more time underwater. Being above water in winter they would die in the harsh cold weather.

Other things also modify their flavors while the oysters clean the water. As filter feeders, a single oyster processes about 50 gallons of water in a day. Oysters eat their preferred algae from the water but they also extract carbon to make the calcium carbonate for their shells and nitrogen to create the protein for their flesh.

Oyster farming can be a profitable farming opportunity, and itâ€™s also a way to fight climate disruption and water pollution. Consider as well all the ice-cold dishes of shucked oysters to enjoy, regardless of how any month is spelled.