The versatile Paints, mainly used for trail riding and western shows, have an interesting history. 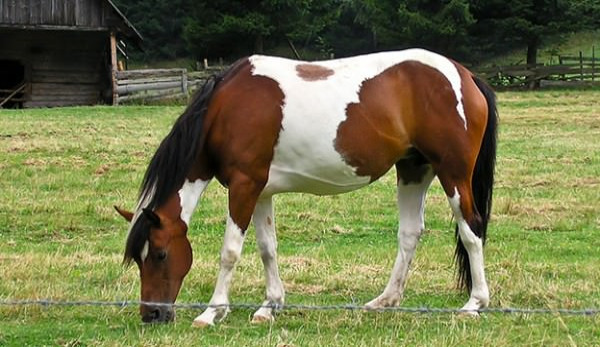 Use: Paint Horses are used for just about every discipline. They are most predominant in western events and as trail mounts.

History: In the 1500s, Spanish conquistadors came to South and Central America, bringing horses with them. Some of these horses had pinto markings. Over time, Spanish horses escaped, and were traded and stolen by Indian tribes. Eventually, pinto horses were found on all the ranches and missions of Southwest. The Pueblo Indians, who had lived here for centuries, learned to ride and became excellent horsemen. Through theft and trading, Indians from other tribes in the U.S. soon acquired horses. Several tribes came to have a special fondness for pintos. As large herds of cattle began to spread through the West, ranchers needed a horse that could help manage the cows. The Quarter Horse breed was developed, mostly as a cow horse. Pinto-marked foals were occasionally born from Quarter Horse breedings, the result of Spanish blood in the breed. Because American Quarter Horse Association did not recognize foals with pinto markings, these patterned horses could not be registered. In the 1960s, admirers of spotted Quarter Horses formed the American Paint Horse Association to preserve and recognize this patterned horse. Today, the Paint is the second most popular breed in the United States, and the fastest growing breed in America.

Conformation: Paints come in two main types of patterns: tobiano and overo. Tobianos have both white and a dark color on their bodies. The dark color can be black, bay, chestnut, buckskin or palomino, and usually covers one or both flanks. All four legs are usually white. The patches in the tobiano pattern tend to be oval or round, and go down over the neck and chest. The face markings on a tobiano are the same as on a solid-colored horse. A tobiano may be mostly dark or white, and the tail is usually white mixed with a dark color. Overos have white and a dark color on their bodies. The white does not cross the back of the horse between its withers and its tail. The white also tends to look scattered or splashed. In most overos, one or sometimes all four legs are dark. Overos have large white head markings, like a bald face, apron face or bonnet face. These horses can be either mostly dark or mostly white, and the tail is usually one color. Because of their close relation, Paints and Quarter Horses have similar conformation. They measure anywhere from 14.2 to 16 hands.

Special Considerations/Notes: Paint Horses with considerable white markings on the face may be prone to sunburn.