Control the Big 3 Parasites in Chickens

Infestations of certain types of mites, lice and fleas can decrease egg production and affect bird health. Learn to fight these parasites. 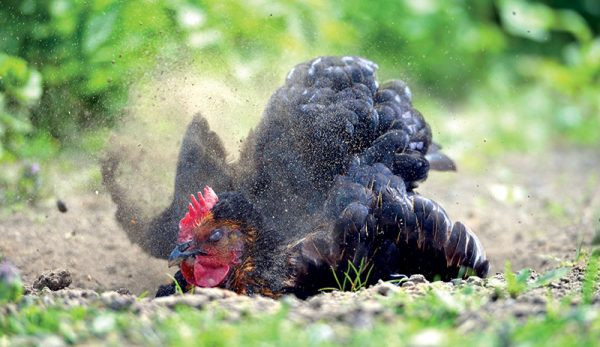 Ectoparasites are those that feed on the skin, scales or feathers of your chickens. These may cause problems for your flock in terms of egg production and health, and in severe cases, may lead to fatalities. Ectoparasites are either continuous or temporary parasites.

Continuous parasites spend their entire adult life cycle on the bird, while temporary parasites live off of the bird but feed on its blood. Amy Murillo, Ph.D., at the University of California, Riverside, identifies three ectoparasites to look for in your flock and shares her expertise for controlling parasite populations.

These mites (Ornithonyssus sylviarum) are the most prevalent parasites among chickens, living in the feathers along the birdsŌĆÖ vents. Northern fowl mites are found in flocks around the country, but they prefer cooler climates and are most troublesome during the winter and spring months.

Northern fowl mites are only about 1Ōüä25 of an inch, have eight legs and are typically black or brown. ŌĆ£To check for northern fowl mites, closely observe the vent area of poultry,ŌĆØ writes Jacquie Jacob, associate poultry specialist at the University of Kentucky, in ŌĆ£External Parasites of Poultry.ŌĆØ ŌĆ£Northern fowl mites appear as tiny specks moving quickly on the skin. Sometimes the most obvious indication of an infestation is the presence of eggs and mite fecal material (black specks) in the vent area.

There are several species of lice found on chickens, including the chicken body louse, shaft louse and fluff louse. Lice are pale yellow or white in color and mostly feed on feathers. Poultry lice are host specific and canŌĆÖt be transferred to humans. Fall and winter are the most common times to observe infestations.

Carrie Pickworth and Teresa Morishita write in ŌĆ£Common External Parasites in Poultry: Lice and MitesŌĆØ for The Ohio State University Extension that the lice found on poultry do not suck blood as the lice found in other species of animals. ŌĆ£Rather, they feed on dry skin scales, feathers and scabs,ŌĆØ they write. ŌĆ£Inspect the ventral region of the bird for live lice crawling on the bird and for nits (lice eggs), as most infestations start in this area of the birdŌĆÖs body. Eggs are white and commonly appear in bunches on the lower feather shaft. Feathers of infested birds may have a moth-eaten appearance. Due to the feather damage, the bird may have a dull or roughened appearance.ŌĆØ

Sticktight fleas are also problematic. ŌĆ£The adult fleas embed themselves into the face, comb and wattles of the bird while they blood-feed,ŌĆØ Murillo says. ŌĆ£The immature fleas (larvae) live in organic material, such as bedding.ŌĆØ

Mating usually occurs on the bird, according to the Alabama Extension Service. ŌĆ£Female fleas lay eggs, which drop to the floor or into the litter. Eggs hatch in a few days, and slender white larvae feed on debris in cracks and litter on the floor. Larvae spin cocoons and pupate. Adult fleas then emerge from the pupal cases. Generations are completed in one to two months.ŌĆØ

Cleanliness and biosecurity are the first lines of defense against parasites in your flock. Clean the coop regularly, and seal any cracks or crevices to limit rodent access.

Inspect your birds regularly, ideally monthly, and monitor parasite populations. Preferably, examine all birds, but if itŌĆÖs a large flock or itŌĆÖs too difficult to catch all the birds, focus on males, birds that look ill, or birds with damaged or commercially trimmed beaks.

ŌĆ£It is unlikely that ectoparasites will be equally distributed among a flock, and these birds are most likely to harbor detectable levels,ŌĆØ Murillo says.

Insecticides may be used to treat infestations. Murillo cautions that not all insecticides are legal for use on birds in all states. Some may only be used in the coop or surrounding environment. The University of California, Riverside, department of veterinary entomology hosts a searchable database (www.veterinaryentomology.ucr.edu) for registered insecticides by state that may be helpful in identifying products you can use.

Another alternative is providing a food-grade diatomaceous earth dust bath. ŌĆ£We found that the most effective way to use DE is to mix about six cups with approximately 25 pounds of washed play sand in a plastic container, such as a swimming pool or cement mixing bin,ŌĆØ Murillo says.

Simply dusting the birds or the environment is not enough. The birds must dust bathe in it and get the DE into their feathers.

DE is made of microscopic sharp particles that damage the exoskeleton of the ectoparasites. It may irritate people if not used in a well-ventilated area. Dust masks should be worn when handling.

If you catch parasites in your flock early, you may be able to prevent damage to the long-term health of your chickens.