Researchers in North Carolina look at the lifespan and habits of a tiny parasitic wasp that preys on the eggs of stinkbugs. 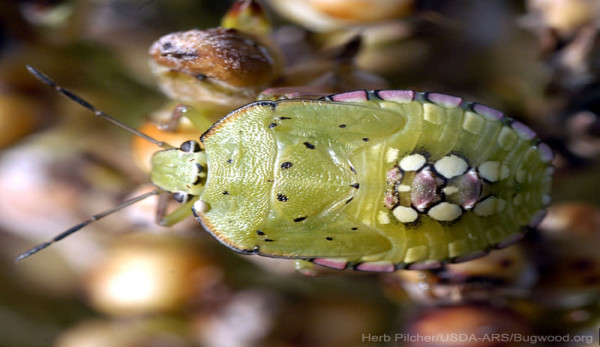 Entomologists with North Carolina State University have unlocked a few secrets in the life cycle of a tiny beneficial wasp that parasitizes stinkbug eggs. The findings increase the potential for biological control of stinkbugs, reducing the need for insecticides.

“The main emphasis of the project was to better understand the biology of the parasitic wasp,â€ť Orr says. “If we can identify bottlenecks in its life cycle, we can use that information to enhance the populations of the parasitoid in the field as a biological control.â€ť

Lahiri says Telemonus podisi is an important nativeÂ beneficial insect because it attacks several species of stinkbugs, including the brown stinkbug, the green stinkbug, the southern green stinkbug and the rice stinkbug. Stinkbugs are major crop pests; however, little is known about the waspâ€™s habitat preferences and nutritional requirements.

“Prior literature suggests that Telemonus podisi retreats into woodland areas from crop fields for overwintering, but no research is available that identifies exactly what those habitat preferences are, so we wanted to expand on that research,â€ť Lahiri says.

Lahiri and Orr studied potential winter refuge sites for the parasitic wasp, such as tree bark, leaf litter, north and south-facing wood lines, dried fruiting and flowering bodies, insect cocoons, and fallen pine cones. They found that the wasp will overwinter in both leaf litter and bark because it prefers to hang upside down from the tops of refuges made of natural materials and gravitates to refuges that offer more cover.Â

“The number of parasitic wasps, for example, was four times greater in leaf litter than those overwintering in tree bark,â€ť Lahiri says. “This data, combined with lab studies, suggest the importance of woodland field borders with leaf litter from hardwood trees as a refuge area during winter for the parasitoids.â€ť

In the second part of the study, the researchers examined the diet of Telemonus podisi, feeding the insect honey, honeydew and nectar from buckwheat flowers in the lab and measuring the lifespan and rate of reproduction.

“Other studies dealing with honeydew and parasitoids concluded that honeydewâ€”the sugar-rich secretions of aphidsâ€”is typically an inferior food source compared to artificial foods and floral nectars,â€ť Lahiri says. “However, we found that the aphid honeydew is just as beneficial as the flower nectar or honey in terms of enhancing the lifespan and rate of reproduction of the parasitoid.â€ť

Orr believes the differences in the studies might lie in the way the honeydew was presented to the parasitic wasps.

“We fed them honeydew on living leaves with aphids present as opposed to collecting the honeydew directly from aphids,â€ť Orr says. “We are exploring the possibility that microbes on the leaves are changing the nutritional composition of the honeydew and making it a more viable food source for the wasps.â€ť

Orr said that such findings are significant because the honeydew, always available from aphids in the environment, might provide a consistent food source for the wasps when flowers are not available.

“This information will help us and other scientists design ways to conserve and enhance the populations of these parasitoids on farms,â€ť Orr says.