Parsley is slow to grow, but it yields a lot, is profitable and brightens up a market table. Here are all the reasons market farmers should consider it. 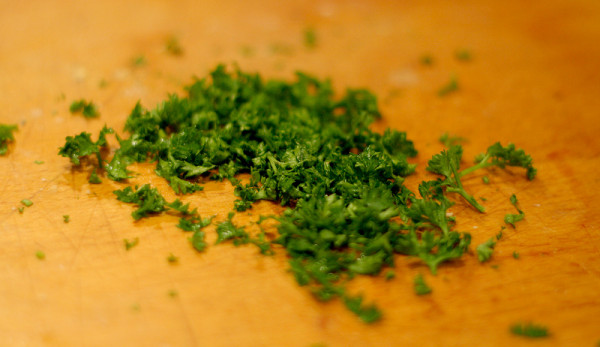 First, however, I should note that there are two kinds of parsley: flat leaf and curled. In culinary terms, they are used almost interchangeablyâ€”and this article is for bothâ€”but some customers might prefer one over the other. Curly parsley has become synonymous with buffet garnish, but that doesnâ€™t mean itâ€™s not delicious. And curly parsley tends to be more cold hardy. So although flat leaf might sell better, I say try both and see what your market responds to.

The one knock on parsley? It’s relatively slow to grow (75 days or so), and it takes as long as 14 days to germinate. Whew, thatâ€™s a big time investment. But start it early enough and the payoff is great. Iâ€™ve had as many as four or five cuttings off one healthy patch of parsley in a year. This is especially true if you add a little extra fertilizer once or twice midway through the season. Parsley rebounds quickly and comes back lushâ€”itâ€™s well worth the work of getting it started.

2. It Brightens Up The Market Table

At least here in Kentucky where my farm is located, greens are just few and far between in the middle of summer. So even though parsley is an herb, it is refreshing to see parsley on the market table for a little bit of greenery. Keep it in a pail with a little water or in piles, both of which should be refreshed often with a cold spritz. I would also recommend keeping a cooler from which to switch out any wilting parsley. The cooler will refresh the wilting parsley.

Parsley might not be as cold hardy as it is heat hardy, but it can stand some cooler temperatures. It is one of the crops we, here in the south, can have successions in the ground from early summer until late fall with some light-to-medium-gauge row cover for frost protection.

Wholesale parsley at this moment can go for more than $8.50 per pound. Yeah, wholesale. So at market you could be looking at prices double that or more, depending on how you choose to sell it. And you can usually get a pound, at least for the first cutting, from about four row feet. So in theory, a 100-foot bed, with three rows of parsley, could be worth $600 wholesale to more than $2,000 retail per cutting per bed. Of course, you still have to market it, but thatâ€™s impressive for one small crop.

Not every market customers is going to use, or know what to do with, parsley. This is true. But there are at least two ways in which you can easily sell it. The first is that you put it into small bunches at a low price and encourage customers to add a bunch with their produce as they payâ€”itâ€™s nutritious and literally goes with everything. Plus it brightens up any meal. If you have to give a few small â€śsample bunchesâ€ť away to get people interested, itâ€™s worth it. Get a customer hooked and theyâ€™ll return for more. The second great way to sell parsley is through restaurants. Believe me, almost every mildly fine-dining restaurant in your town is using parsley, and they are paying a pretty penny for it. There is no reason you canâ€™t supply them with their parsley needs for most or all of the year. Maybe theyâ€™d be willing to pay a little more for locally grown parsley? Doesn’t hurt to ask, and while youâ€™re at it, see what other herbs they might need.