When hatching day came, Velma possessed 7 eggs and Tica had 10 eggs. I think. 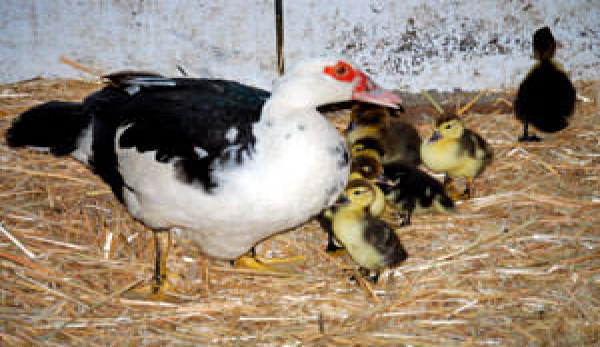 Iâ€™m unsure because during the entire incubation period the expectant mother Muscovies kept tradingâ€”or more likely stealingâ€”eggs from each other.Â

One morning I found the ducks hovering over their nests rather than sitting flatâ€”a sign the eggs might be hatching.Â

Sure enough, when I pulled out a warm egg, I spotted small cracks at the larger end.Â  Holding it to my ear, I heard soft peeps and scrapes.Â  Known as â€śpipping,â€ť this signals the ducklingâ€™s imminent arrival over the next 12 hours or so.Â
Â Â Â Â
Amazingly, all but two ducklings heroically chiseled out of their eggshells at about the same time, meaning the girls had begun incubation simultaneously (what a team!).Â

Velma and Tica kept stealing the two remaining eggsâ€”and their ducklingsâ€”from each other, shifting them gently from nest to nest.Â  After everybody emerged, I found Tica hovering over both broods while Velma ate from the food dish.

I needed to move the ducklings to an adjacent pen, where they wouldnâ€™t be bothered by the other fowl, but I worried about putting both females in with them.Â  Although Muscovies make dedicated mothers, they can step on and accidentally crush their babies when disturbed.
Â
Studying the moms and their little bundles of fluff, I observed that Tica, the younger duck, seemed more enthusiastic about the whole mothering thing than Velma.Â

Every time I came near, Tica lowered her head and gave me a menacing hiss, while Velma seemed more concerned about making up for lost time at the food dish.Â

My oldest duck at 6 years, Velma had experienced the joys and frustrations of motherhood a number of times, so maybe she felt burnt out.Â  I decided to give the babies to Tica.

I caught Tica up and moved her to the next pen, then whisked the adorable ducklings into a hay bucket and transferred them into their new â€śnest.â€ť

As inevitably happens whenever I move moms and ducklings, Tica became frantic.Â  She desperately looked for a way out of the pen, back to her old nest, ignoring the babies right beneath her beak.

After much persuasion on my part, Tica finally got a clue.Â  Oh!Â  There they are!

Meanwhile, Velma had discovered HER babies were missing.Â  Furious, she paced outside the pen door, squeaking up a storm.Â  The next day, even though I plied her with treats, she still hadnâ€™t forgiven me.