You can raise your own pork without becoming a big breeder. Learn how to choose, care for and process pigs for flavorful pork. 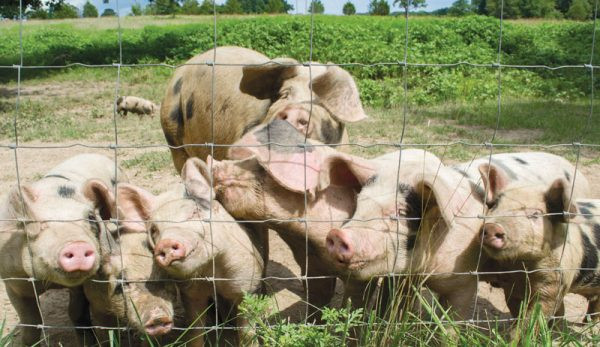 Whether you want better tasting pork, healthier pork, less expensive pastured pork or more food security, growing your own piglets from weaning to slaughter is a great way to have it all. Pigs were initially temporary residents on our farm, arriving in spring after weaning and then going to the processor in the fall before the pastures were barren. We started with two Tamworth barrows (castrated males) in 2004 and raised them for about six months. After having one bite of our homegrown pork, we couldn‚Äôt go back to store-bought. We‚Äôve been raising our own pork ever since.

We raise our pigs outdoors so they can soak up sunshine, eat grass and root around and act like pigs. I can‚Äôt imagine not having our own homegrown pork to eat. But I can understand that not everyone wants the year-round commitment of becoming a hog breeder. What can you do if you want the delicious taste of your own pork but don‚Äôt want to become a hog breeder? You can buy a couple of piglets at weaning and raise them for six months to a year, depending upon the breed and how much pork you want, and then drive them to the meat locker for processing. Two or three weeks later, you pick up your ham, bacon, sausage and other delicacies.

Before you get pigs, however, check for a custom meat locker in your area that can process the pigs for you. Unfortunately, custom meat processors have been disappearing. If one does not exist in your area and you still want to raise pigs, you must be prepared to take on the job of butchering.

To raise pigs, you need appropriate fencing and housing. The housing is easy enough, as they need only a place to get out of the wind and snow or rain. Three-sided shelters work great, either stationary or mobile.

Fencing can be tricky with pigs. They can tear through welded wire, as we learned after only a couple of years. They can scoop their nose under woven wire and lift it off the ground and squeeze themselves underneath it. This is why rigid pig panels are popular.

If you have only a couple of pigs, you can get four pig panels, join them at the corners with carabiner clips and move them through the pasture. Tie a tarp across the top for shade. You can also get temporary electric hog netting. Pigs respect electric fencing once they‚Äôve been shocked a time or two.

Now that you know you can turn the pigs into ham and bacon, and you can keep them fenced in, it‚Äôs time to choose your pigs. First, decide what breed you want to raise. I‚Äôm partial to heritage breeds because they do well on pasture. Modern breeds have been bred to have less fat, so some of them might not do as well raised outside because they have less insulation.

Also know that pink pigs get sunburned if they don‚Äôt have plenty of shade. We love our American Guinea Hogs because they are smaller than most pigs, reaching about 300 pounds mature weight and only about 200 by the time they go to slaughter. KuneKune is another small breed popular among homesteaders that does well on pasture.

Hanging weight, which is the weight after the animal has been disemboweled after slaughter and perhaps skinned, is usually 50 to 60 percent of the live weight. Although other animals are always skinned before being weighed, some processors scald pigs rather than skin them, so in those cases, the hanging weight is a little more.

Our Guinea Hogs usually reach 75 to 125 pounds at 12 to 18 months of age, which is when we usually send them to the locker. However, if you want more pork from fewer animals ‚ÄĒ or if you want a shorter time commitment ‚ÄĒ the larger breeds finish in about six months. When we raised Tamworths, they usually reached about 200 pounds hanging weight by 7 to 8 months of age.

If you are not intimidated by the idea of a 400-pound live animal at finishing, then a Tamworth, Large Black, Red Wattle or Gloucestershire Old Spot might be a good choice for you. Purebred breeding pigs are registered with breed associations, which have breeder‚Äôs directories online as well as descriptions of their hogs. Some of the rarer breeds are harder to find in some areas, but you never know whether you‚Äôll get lucky and find someone near you raising the exact breed you want.

Like most animals, a pig is happier when it has a friend, so you should buy at least two. If you don‚Äôt think your family can consume that much pork in a year, perhaps you can find a friend or neighbor interested in buying the pork from the other pig. However, you might be surprised how fast you will go through your pork when it‚Äôs just sitting in your freezer waiting to be eaten.

A couple of pigs at weaning can easily fit into a large dog crate. However, you probably don‚Äôt want them in the back of your minivan or SUV. We didn‚Äôt own a pickup truck when we bought our first two feeder pigs, and I‚Äôll never forget that 90-minute drive home.

We had transported goats, sheep and turkeys, among other animals, in the back of our family minivan, so I assumed transporting pigs would be no different. Although pigs on pasture really don‚Äôt stink, they do emit quite a pungent odor when confined inside an automobile. Shortly after that, we bought a pickup truck, and all future piglets were transported in a large dog crate on the back of the pickup.

Once you get your new pigs home, be sure to have someone help you carry the dog crate to the area where the pigs will live. This way, you can simply open the crate door and let them come out when they are ready.

Piglets do not like to be held, and I will never forget the smell of pig urine on my son and me as we tried to take our first pigs out of the dog crate and carry them to their pasture. Most piglets won‚Äôt do that, but you probably don‚Äôt want to risk it.

While pigs can‚Äôt eat quite everything, they are omnivores and can eat most foods‚ÄĒand lots of it. Although you can give them kitchen scraps, don‚Äôt give them anything that you wouldn‚Äôt eat yourself, such as moldy food or cooked food that has been sitting out for several hours, which could make them sick. Even though they eat almost anything you put in front of them, that doesn‚Äôt mean whatever you give them will make them grow big and healthy.

It would be easy to simply say you can buy a complete grower pig ration at your local farm-supply store and let the pigs eat as much as they want. Maybe that will work for you, but it produced pigs that had way too much fat for our taste, probably because we have heritage pigs, which tend to be easy-keepers.

Pigs need only about 5 percent of their body weight in food daily. If you give them more than that, it should be foods that aren‚Äôt overly high in carbohydrates. Pigs on pasture can certainly eat as much grass as they want, as well as acorns and whatever else they can forage. Before you start weighing your pigs‚Äô feed, however, keep in mind that if a pig starts to get obviously overweight, you can cut back on feed. If it looks too thin, you can feed more.

If you have nut trees on your property, you can have mast-finished pork. We usually plan to have pigs processed in November after they have eaten lots of acorns and hickory nuts in October. You needn‚Äôt shell the nuts for the pigs. They do a fine job themselves. In fact, our pigs clean up our driveway for us. For years
I worried that someone would take a nasty fall walking in our driveway in October when it‚Äôs covered with acorns. Now, we put the pigs out there with temporary electric fencing, and they clean up all the acorns for us. Mast-finished pork is an expensive delicacy in many areas, and we get it for nothing extra.

Local breweries will often let you take away their spent brew grain. This benefits the breweries, too, because otherwise they would have to pay someone to haul it away. About 20 percent of your pigs‚Äô diet can consist of the spent brew grain. Although some people pick up day-old bakery goods, I don‚Äôt recommend it because it can lead to obese and unhealthy hogs, just as it can with humans.

If you have dairy cows or goats, you can give excess milk and whey to pigs. In fact, we originally bought pigs to consume the whey left over from our cheese making. If you give it to them in a pan, they will bury their snout in it and not come up for air until the pan is empty. You can also mix it into their feed.

Pigs need constant access to water. However, pigs like to play in water, so putting a pan of water on the ground doesn‚Äôt work for long because they lift it with their snout and tip it over. A bucket clipped on the fence might be too high for them to reach. Basically, you need to have a water trough short enough for them to reach the water but big and heavy enough that they can‚Äôt tip it over.

Our first attempt at raising a couple of feeder pigs was fairly uneventful, but trying to load them onto the trailer almost turned us off from ever trying to raise pigs again. Not only did the pigs not easily load up on the trailer, they escaped and ran all over our yard for almost an hour before we captured them. We‚Äôve since devised a system to make loading pigs easy. A week or two before we take pigs to the locker, we back up the trailer to the gate of the pasture or we park the trailer in the pasture. We open the trailer so the pigs can walk inside and check it out whenever it feels safe enough. Then we start feeding them in there. When slaughter day arrives, we put their food in the trailer and close the door when they go inside.

Pigs were the first animals I brought to our farm specifically for their meat, and pork is now my favorite meat. We might not always breed hogs, but I can‚Äôt imagine not growing our own pork. Having a couple of pigs as temporary residents on your farm is a great way to provide your family with healthier and tastier pork.

Here are the cuts of meat, from snout to tail: