Pasture Goats & Chickens Together For A Dynamic Duo

It just makes sense to pasture goats and chickens together, though there are a few considerations to keep in mind when mixing species. 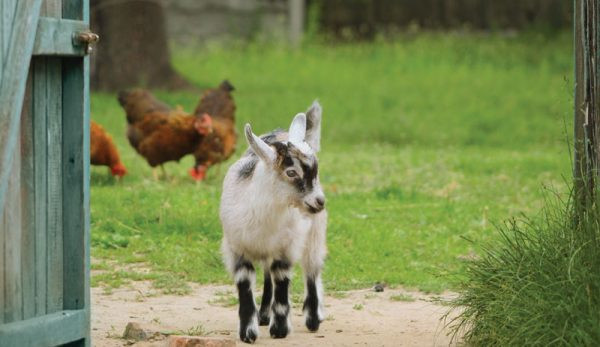 Today, a common hobby farm goal is increased self-sufficiency and decreased reliance on traditional food sources like grocery stores. One popular method of achieving this is to add productive livestock such as goats and chickens for their milk, eggs and meat.

Space limitations, however, sometimes restrict the types of animals that can be supported on a farm.Â

Fortunately, goats and chickens are two species that can successfully pasture together to conserve space, so long as you takeÂ  the proper precautions. Things to consider when planning to jointly pasture goats and chickens include the benefits, disease transmission, pasture size and plants, housing and fencing.Â

Benefits of Pasturing Together

Putting goats and chickens together in a single pasture does take some additional planning, work and effort. So, you need to decide whether the benefits are worthwhile.

The potential advantages of pasturing chickens and goats jointly include:

Read more: Rotate your animals’ pastures to keep them on green all season long.

A common concern when pasturing chickens and goats together is disease transmission. But, in reality, itâ€™s seldom an issue.

Goats and chickens are susceptible to coccidiosis, a disease of the intestinal tract caused by the parasite coccidia. But coccidia are species-specific and not transmitted between goats and chickens.Â

However, Melissa Holahan, a veterinarian as well as the creator of Goat Melk Soap Co. and owner of Chubb E. Acres Farm, does caution that chickens may shed the bacteria salmonella in their droppings.

Adult goats or chickens usually have sufficiently robust immune systems to resist serious sickness from coccidia or salmonella. But young or sick chickens and goats are susceptible to developing parasite or bacteria overload and disease. The main indicator is diarrhea, which is followed by dehydration, weakness and death in serious cases.Â

To avoid these diseases, prevent overcrowding and keep your livestock areas clean. If your chickens or goats show signs of diarrhea or illness, immediately quarantine them and call a veterinarian.

The faster they get treatment, the more likely they are to survive.

The number of chickens and goats that can successfully pasture together in a given area depends primarily on the breed sizes that you intend to keep. If larger breeds are kept, then fewer livestock can be accommodated.

Also, you should always plan on at least two goats because they are herd creatures and need a goat companion to be happy. The examples below assume 5-pound hens, 75-pound Nigerian Dwarf does and 135-pound Nubian does.

The general rule-of-thumb for pasturing chickens is no more than 50 to 80 chickens per acre. At any higher stocking densities, the chickens eventually completely denude the pasture and add too much manure for the pasture to regrow.

This stocking density assumes that the chickens have continuous access to a nutritionally complete chicken feed. Thatâ€™s because you canâ€™t rely on the pasture to supply balanced levels of nutrients for that many chickens year-round.Â

When you add goats, the number of chickens per acre needs to be reduced. For example, if two Nigerian Dwarf does were added, then about 30 fewer chickens could be accommodated.

Each goat would replace about 15 chickens (75 pounds/5 pounds = 15). So, using the more conservative 50 chickens per acre rule-of-thumb, a 1-acre pasture could sustainably accommodate about two Nigerian Dwarf goats and 20 chickens:

Alternately, using 80 chickens per acre as the starting point, four Nigerian Dwarf does and 20 chickens could be accommodated:

Or, if adding larger Nubian does, it would drop to two does and 26 chickens:

Again, this stocking density assumes that the goats have access to a nutritionally balanced diet in addition to pasture forage.Â

Conditions vary significantly from farm to farm. So does the optimum stocking density, but the previous examples provide a starting range. In general, itâ€™s better to plan on lower densities because overcrowding increases the risk for disease and parasites.

On our farm, we found that around 12 to 15 Nigerian Dwarf goats and 20 to 25 chickens co-exist well on about 4 fenced acres.Â

Read more: Here are some things to know if you’re considering getting goats.

Chickens arenâ€™t picky about pasture conditions. Even with continuous access to chicken feed, chickens do a lot of foraging. Theyâ€™ll scratch and eat the nutritious vegetation down at ground level, while avoiding questionable or poisonous plants.Â

Goats, however, prefer to reach up to browse rather than down to graze like sheep or cattle. That means areas with woody underbrush make excellent goat pastures.

Making goats reach down to graze on a grassy pasture isnâ€™t ideal. This forces the goats to eat where intestinal parasites (spread via manure) thrive and increases the likelihood of internal parasite problems. Â

Goats are happy to eat things that we consider weeds such as poison ivy and multiflora rose. There are, however, plants that are extremely toxic to goats. These plants should be eradicated from pastures before allowing goats to browse.

Azalea, hemlock, mountain laurel, rhododendron, rhubarb and wild cherry are all plants that are highly poisonous to goats and should be removed from their pastures.

Cornell University maintains a reference list of plants toxic to goats. It would, however, be impractical to remove every plant on its list. Fortunately, if goats have access to sufficient quantities of nonpoisonous plants, theyâ€™ll usually avoid or only nibble those that are mildly toxic to them. Â

Although itâ€™s feasible to jointly pasture chickens and goats, itâ€™s not a good idea to house them together. Thatâ€™s because goats are finicky and chickens put droppings everywhere.

In addition to the dropping problems, access to chicken feed is an issue for goats. Goats love chicken feed and will go to great lengths to get it. But once they start eating, they donâ€™t know when to quit and will gorge on it. This leads to bloat which can easily be fatal.

Finally, even if the chickens have nice, safe nest boxes, for some reason, they love to lay eggs in the goatsâ€™ hay.

In order to prevent these problems, itâ€™s best to house, feed and water chickens in their own separate coop and goats in the barn. I

tâ€™s generally easy to keep goats out of a coop simply by making the chicken access door too small for the goats. Then you can provide the chickens with free-choice feed and water inside the coop without worrying about goats getting in.

Keeping goat kids out may be a bigger problem.Â

â€śIt amazes me that goat kids can squeeze through literally the smallest doors!â€ť Holahan says. â€śThe only chicken door design that seemed to defy the goat kids was making a pop hole just wide enough for one chicken at a time and elevating it.â€ť

It can also be difficult to keep chickens out of the goatsâ€™ pens. Unless you turn your goats out to pasture and shut the barn doors, the chickens are likely to eventually get in. We minimized this problem by placing livestock access to the chicken coop and goat pens on opposite sides of the barn. That way, most of the chickens never found the goat pen entrance doors.

But, thereâ€™s always a rogue bird that figures it out and starts teaching other chickens. In that case, we isolated that bird for a few days and it would forget how to get to the goat pens. If a few birds do get into the goatsâ€™ quarters and eat a bit of hay or grain, itâ€™s generally not detrimental to the birds. Itâ€™s just the issues with chicken droppings and eggs.Â

Read more: Ready to add livestock to your flock? Here’s where to start.

Fencing a pasture is a long-term investment. It pays to make sure itâ€™s done correctly.

Many predators think pastured animals look particularly tasty. So give consideration to keeping predators out, as well as keeping in livestock. There are several different materials that can be used for fencing, but for goats and chickens, the fence should be at least 4 feet high.

Cattle panels are 16 feet long and can be configured in many ways. They can also be cut into smaller sections.

Woven wire fencing is a common choice, but it should be supported with sturdy posts set relatively close together (10 feet or less) for stability and to prevent sagging. If using cattle panels or woven wire to create pastures intended for chickens or dwarf goats, itâ€™s important to use a smaller 2-by-4-inch mesh size (at least near the bottom) rather than the standard 4-by-4-inch mesh to keep the chickens and goat kids from slipping out.Â

This is generally accomplished by installing electric fencing along the top and near the bottom on the outside of cattle panel or woven wire fencing. Welded wire fencing is not recommended for goats because they rub and stand on the fence. This will break the welds and eventually destroy the fence.

Some keepers use chain-link fencing, but itâ€™s expensiveâ€”especially when fencing large areas.Â

Farmers have pastured livestock species together for centuries. With a proper setup, itâ€™s fairly easy to successfully pasture chickens and goats together. As long as you prepare for a few special needs, they happily co-exist and provide delicious eggs, milk and meat for your farm.Â

Garden greens can be great treats for chickens and goats. Keep yours happy by feeding them greens from the following vegetable families.

These vegetables are all great sources of nutrition and are also considered to be natural dewormers.

The original food used for chicken scratch, corn is best fed in moderation because itâ€™s low in protein and nutritional value as well as high in carbohydrates. The entire plant is edible, take care when feeding the stalks and leaves, as too much can cause problems in both chicken crops (stringy leaves can cause impacted crops) and goat rumens.

All of these plants make great additions to their diets, and sunflowers can be dried to feed during the winter.

Chickens and goats tend to love the plants from this family. The tops and roots can be fed and are nutritious for them.